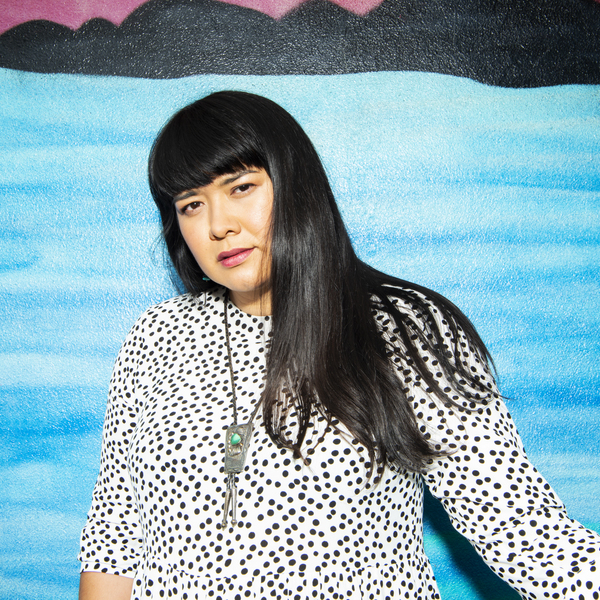 Join us on Wednesday, August 28 for a shop floor performance with Black Belt Eagle Scout, who releases her Saddle Creek sophomore on 8/30.

Released in September of 2018, Mother of My Children was the debut album from Black Belt Eagle Scout, the recording project of Katherine Paul. Heralded as a favorite new musician of 2018 by the likes of NPR Music, Stereogum, and Paste, the album was also named as a “Best Rock Album of 2018” by Pitchfork, and garnered further end-of-year praise from FADER, Under The Radar and more.

Arriving just a year after that debut record, At the Party With My Brown Friends is a brand new full-length recording from Black Belt Eagle Scout. Where that first record was a snapshot of loss and landscape and of KP’s standing as a radical indigenous queer feminist, this new chapter finds its power in love, desire and friendship.

At the Party With My Brown Friends is a profound and understated forward step. The squalling guitar anthems that shaped its predecessor are replaced by delicate vocals and soft keys, sentiments spoken and unspoken, presenting something shadowy and unsettling; a stirring of the waters.

The end result presents a captivating about-face that redefines KP’s beautifully singular artistic vision. At the Party With My Brown Friends is introduced in greater detail here via a new statement by the artist.

My name is Katherine Paul and I am Black Belt Eagle Scout.

I grew up on the Swinomish Indian Reservation in NW Washington state, learning to play piano, guitar and drums in my adolescent years. The very first form of music that I can remember experiencing was the sound of my dad singing native chants to coo me to sleep as a baby. I grew up around powwows and the songs my grandfather and grandmother sang with my family in their drum group. This is what shapes how I create music: with passion and from the heart.

After the release of Mother of My Children, I felt awake and desperately wanted to put new music out into the world. I had no real intent behind At the Party With My Brown Friends except creating songs around what was going on in my life. In the past few years, the reciprocal love I experienced within friendships is what has been keeping me going. A lot of what is in this album deals with love, desire and friendship.

The lead single, “At the Party,” starts off with a quintessential BBES guitar lick, heading into booming and abundant drums and vocals. The lines ‘How is it real? We will always sing’ came out of me one evening when I was crafting the song in my bedroom. Within my conscious self, there is always a sense of questioning the legitimacy of the world when you grow up on an Indian reservation. We are all at the party (the world), trying to navigate ourselves within a good or bad situation. I happen to be at the party with my brown friends- Indigenous, Black, POC who always have my back while we walk throughout this event called life.

I started writing “My Heart Dreams” the summer after I initially put out MOMC, writing the guitar chords in a friend’s apartment on Ohlone land. I had been in a transitional part of my life, leaving one love and wanting to find another so much so that I felt like my heart was dreaming about it along with my brain at night. I have an obsession with dreams, mainly because I cannot remember most of mine and often times that leaves me frustrated not knowing that part of myself. I would wake up and be overcome with anxiety about not knowing what had gone down in my brain so much so that I started feeling like my heart dreamt more than my mind, thus becoming the line, my heart dreams.

I wrote “Going To The Beach With Haley” one day when I was out on a coastal trip with my friend Haley Heynderickx. We loaded up her car with our blankets and instruments and drove straight to a beach where we sat and listened to the waves and young families with their babies on the beach. I had brought my mini casio keyboard that had an array of beats I used when writing songs. The beat that’s on the song just stuck there along with the main guitar part. Initially written on an old acoustic guitar my mom bought me, the song really transformed in the studio where I added drums and other melodies to create the song.

Throughout the course of my writing and playing around this record, most of these songs deal with relationships I have either with loved ones or friends. I think it low key has to do with my anthropology degree, but also the fact that writing and playing guitar in my bedroom just makes everything feel better for me. For the longest time, I wanted to convey my feelings around coming out to my family. It had been a good experience for me and while I know it is not always that way when kids decide to tell their family, I think that we can open our hearts more for that. I would watch youtube videos of moms being proud of their kids surrounding their sexuality and gender identity and I really wanted to raise my voice to say, ‘my family too!’ What started with trying to sound so literal in this song ended up turning into a song about how much I love my mom and how our connection is eternal. “You’re Me and I’m You” is about being one with your mother, since we all were a part of their bodies at one point. It’s me trying to explore who she is and who I am with my love for people.

At the Party With My Brown Friends, Black Belt Eagle Scout’s second full-length album, is out August 30,, 2019 on Saddle Creek.