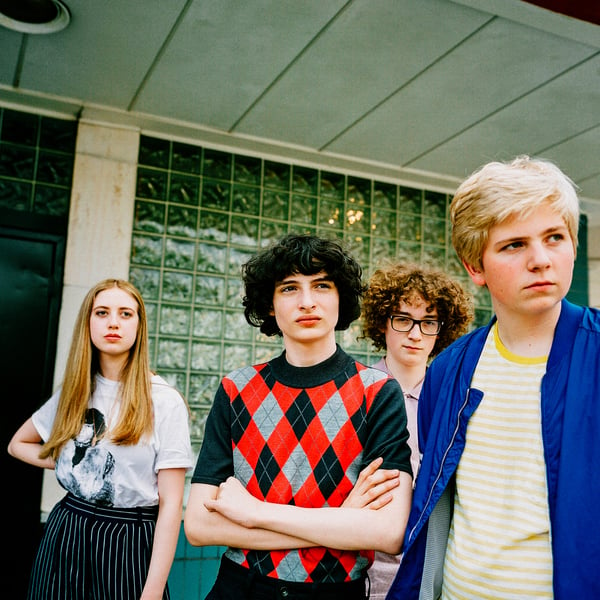 Join all four members of Calpurnia in the venue on Wednesday, June 6th at 6:15pm for an exclusive first listen to their new EP Scout, with signing of their 7” single Greyhound / Louie to follow.

PLEASE NOTE: Following the listening party, Calpurnia will be signing their Greyhound / Louie 7" in the shop as a gift with pre-order of the EP. Fans can come pick up the Scout EPs in-store starting release day (June 15th).

Calpurnia’s story is how teenage rock dreams are meant to unfold: four friends, all raised on a healthy diet of the Beatles, Nirvana and David Bowie, and a deep love for their respective instruments, retreat one day to a basement and begin jamming together. They cut their teeth on some cover songs and then, with just enough confidence and a dose of adolescent enthusiasm, they write and record their own tunes. And the results are nothing short of stunning. “It was kind of destined to be,” Finn Wolfhard says of the almost serendipitous genesis of the rough-and-tumble Vancouver-based indie-rock foursome he formed with three of his now-closest friends. “We all just really clicked. And when I’m passionate about something,” the singer-guitarist adds of Calpurnia, who this spring release their self-titled debut EP via Royal Mountain Records, “I like to get it done as quickly as I can. There’s not a lot of wasting time. I love just going for it. Go big or go home.”

The band — which in addition to Wolfhard includes lead guitarist Ayla Tesler-Mabe, a six-string prodigy whose bedroom-shredding viral videos have earned her legions of fans on social media, bassist Jack Anderson and drummer Malcolm Craig — all grew up within walking distance of one another. But it took Wolfhard — best known as one of Hollywood’s hottest young actors thanks to his role as Mike Wheeler on Netflix’s hit series “Stranger Things — meeting Craig on the set of Canadian punk rockers PUP’s “Guilt Trip” music video for things to finally spring into motion. In short order, the pair met Tesler-Mabe at a music summer camp, and she quickly introduced them to Anderson, her close childhood friend and bassist. “And as soon as we started rehearsing it was just insane,” Anderson says of the quartet’s instant personal and musical chemistry. “It was kind of unbelievable. Like a gift.” Once they played their first official gig together, it was a done deal. “We had all the adrenaline we needed,” Craig says. Where they’d previously played cover songs, “after the response we got,” Craig notes, “we were like, “Let’s record some of our own music!””

Now, after spending 10 days in Chicago last November recording their debut EP with Twin Peaks’ frontman Cadien Lake James serving as executive producer, Calpurnia are primed to let others in on their inimitable union. “It’s like a four-way Venn diagram,” Anderson says of the band’s coalescing musical tastes that seamlessly come together on their six-song debut, a giddy rock riot that sits comfortably at the intersection of classic rock, punk and angsty blues. “We all have our own sounds and our own influences,” Tesler-Mabe offers, “but somehow when we all come together all our different sounds and styles amalgamate to create something new. It just works.”

It takes no more than 25 minutes, or roughly one spin through the band’s EP, to understand just exactly how well their sophisticated, diverse taste congeals into something so effortlessly powerful. From “Greyhound,” a slacker anthem recalling vintage Pavement to “Louie,” all Exile on Main Street-style country-blues slide guitar and choirboy harmonies, to the spaced-out closing opus “Waves,” Calpurnia’s songwriting craft belies not only their age but their experience as a collective unit. “It was super fun watching these ideas come to life,” Anderson offers with supreme modesty. “Seeing the stuff we’ve been working on for so long reach its full form is incredible.”

The earliest evidence Calpurnia meant business came in mid-2017 when they uploaded a video to YouTube of them covering Twin Peaks’ twangy “Wanted You.” And the ingredients were all there — Wolfhard’s mop top whipping with reckless abandon while adding a gravely growl to the Rolling Stones-flavored tune; Tesler-Mabe laying down a fiery solo; Anderson stretching out a driving bass line; and Craig laying down a dutiful rhythm. Soon they were playing at a charity event in LA “and immediately all of us were like “We need to write together,” Wolfhard recalls.

Having been a longtime fan of Twin Peaks, and struck up a friendship with Lake James over the years, Wolfhard was nothing short of ecstatic when the Twin Peaks musician agreed to produce Calpurnia’s debut. “Cadien really feels like all our second father or brother,” Wolfhard says recalling the Chicago sessions at Twin Peaks’ home studio – a creatively fulfilling undertaking Wolfhard calls “one of the best experiences of my life.”

Adds the singer, “They’re the sweetest warmest people. It was genuinely the most family-oriented thing. It was the only 10 days of my entire life where I never once met an asshole,” he says with a laugh. Not that there wasn’t nervousness among the band members to be working so closely with the leader of one of their favorite bands. But “immediately I felt totally at home there,” Tesler-Mabe remembers. “I quickly realized that Cadien understood what we wanted to create. He helped us create something real and in his own way helped add his own musicality and his own spirit to the record. He just totally understood the direction we wanted to go in.”

Calpurnia are anxious to hit the road behind their EP, and will be touring and writing as much they can around Wolfhard’s jam-packed acting schedule. “We’re talking about new music constantly,” Wolfhard says, noting the band gets together at every chance, and even when physically apart, they’re vigorously communicating with one another via phone and text when inspiration strikes.

Given how much they’ve already accomplished, however, Calpurnia are happy to embrace the moment. “I’d always had this idea of being in a band with my three best friends and it’s unbelievable that it actually happened,” Tesler-Mabe says. “It’s so cool that we’re being given the opportunity to just be ourselves.”