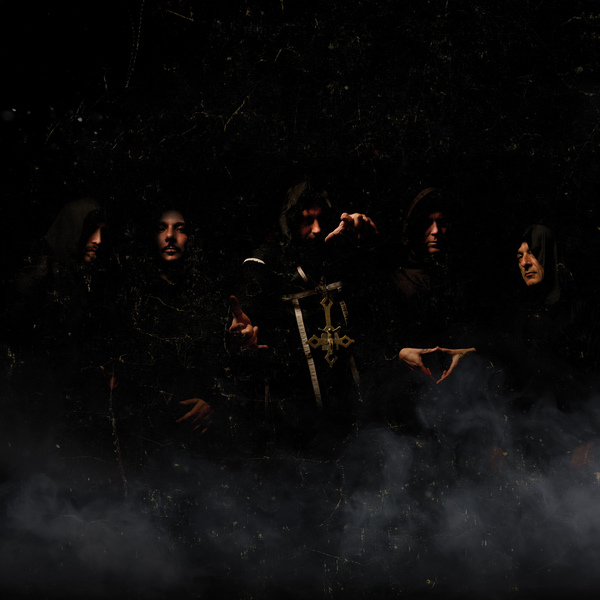 Celebrate the most notorious black metal band, Mayhem's upcoming new album 'Daemon' (out 11/8) with a signing of a special poster.

Pre-order 'Daemon' on CD or LP/LP+ from this page for entry.

By the power of darkness and with the might of black-hearted will no two Mayhem albums have been or will ever be the same. Over the course of Mayhem’s storied and groundbreaking 35-year career—from Deathcrush (1987) through Esoteric Warfare (2014)—the Norwegians have continuously challenged the orthodoxy of the genre they helped create. Originally informed by greats Hellhammer, Venom, Bathory, and Sodom, Mayhem eventually imbued their damnable attack with influences from all over the music extreme spectrum, indicated first on the harsh and angular Wolf’s Lair Abyss (1997) EP and foremost on the enterprisingly brutal and revolutionary Grand Declaration of War (2000). In 2019, Mayhem will yet again leave holy earth scorched on new album, Daemon.

“Mayhem will always be Mayhem,” says guitarist/songwriter Teloch (aka Morten Bergeton Iversen). “If we put the genre game aside a bit, no one else sounds like Mayhem. Even when De Mysteriis came out, it was not at first considered to be a black metal album, if my memory serves me right. Tricky to label this band. Metal would be the most fitting; it’s not pure black metal, in my opinion. Not sure it has ever been actually, despite what the general opinion is. People can call it whatever they want. If it’s black metal to them, then fine. We don’t really care. To me, it’s important to keep some sort of black metal vibe at least.”

Founded in 1984 in the quaint village of Langhus, Norway by the late (and visionary) frontman Euronymous (aka Øystein Aarseth), Necrobutcher (aka Jørn Stubberud), and Manheim (aka Kjetil Haraldsson), Mayhem’s small-town origins didn’t prevent them from achieving global domination. By 1986, the Norwegians had ventured headlong into the proverbial abyss with the release of their first demo, Pure Fucking Armageddon, a cacophonous mob of metal so extreme classifications of the day didn’t apply. Certainly, sides “Fuck” and “Off” were indicators of Mayhem’s fractious aesthetic, but it was their debut EP, Deathcrush (1987), that set off alarm bells. All was not well in Norway. From lineup shifts, record stores, and suicide—vocalist Per Yngve Ohlin (aka Per Yngve Ohlin) shot himself in 1991—to record labels, The Inner Circle, and death—Euronymous was killed by Varg Vikernes in 1993—Mayhem’s eternal spirit and flesh have not only endured but also evolved into a monster as dangerous to mind as it is body. Daemon continues Mayhem’s relentless malice and wicked aesthetic.

“Esoteric Warfare was strictly a concept-themed album,” Teloch says. “Lyrically, visually and musically. With Daemon, we tried a different approach and said, ‘Fuck the themes!’ but it kinda turned into a themed album anyway. There will always be some sort of red line between albums, even if it can be really thin. Easy to link almost everything up to a theme if you are creative enough.”

Daemon isn’t a direct follow-up to Esoteric Warfare. Like all Mayhem albums of their time, Daemon is unto itself. The wolf solitary and singular. Indeed, Daemon also isn’t a new chapter in Mayhem’s storied career. Rather, it’s a new tome, authoritative yet wild in character. Composed and decomposed with the same lineup—Necrobutcher (bass), Hellhammer (drums), Attila Csihar (vocals), Teloch (guitars), and Ghul (guitars)—that handled Esoteric Warfare and performed De Mysteriis Dom Sathanas in its entirety over the last few years, Daemon isn’t a retrofit of classic songs like “Freezing Moon,” “Pagan Fears,” or “Buried by Time and Dust” either. That’s what the live album, De Mysteriis Dom Sathanas Alive (2016), was for. Daemon is change, an opportunity for the maw of hell to open wider.

“There will never be a De Mysteriis Dom Sathanas II,” says Teloch. “The main writer [Euronymous] is dead, and everyone is older. We don’t see much left of the youth rebellion that was going on at the time. Natural progress. Back then, they didn’t know what they were doing, in a way. Now we have been in the game too long and know what we are doing. Or at least we try faking knowing what we are doing. All we did for a couple of years—before writing Daemon—was touring for De Mysteriis Dom Sathanas. Naturally, we were a bit inspired by that tour. But we did not go into it thinking we would make a new De Mysteriis Dom Sathanas. That would’ve been suicide (pun intended).”

As most bands enjoy fraternal relationships within their respective ranks, Mayhem’s internal order is expectedly antagonistic and quarrelsome. Fights, arguments, and disagreements formed the bulk of the inspiration that has fueled over the last three decades. Daemon was also the byproduct of irascible and captious individuals. Anger, frustration, and the continued struggle to push—at whatever cost—the band’s music forward were at the dark heart of Mayhem’s newest album. The writing for Daemon started in October 2018, with the mandate that everyone was on the hook to contribute. That process, however achievable with time, didn’t pan out entirely, but the deconstruction of Mayhem’s heinous and intricate sonic architecture did take hold.

“Everyone was welcome to throw things in this big pot of evil-spawning puke,” Teloch says. “Instead of one person writing music and the other lyrics, we all now tried to throw in whatever we had. If we had 10-20 more years to make the album that could have worked out. But we had already booked the album tour before we had started writing the album. We just had to get it done. Also, doing Daemon in our 70s was a bit of a stretch, to put it mildly. So, the initial idea was to simplify everything, trying to forget how to write riffs; just like we started out, all blue-eyed. That, of course, became very boring for us. So, we tried finding a line where we simplified—and simplified—but at the same time kept it interesting enough for us to actually go into the studio to record.”

Mayhem entered NBS Audio Studio (aka Necromorbus Studio) in Söderfors, Sweden to record drums and vocals with producer/engineer Tore Stjerna. Newly consecrated Studio A (Stjerna’s Stockholm studio will continue to operate as Studio B) in an old church, Hellhammer and Csihar recorded their respective parts for Daemon. The band then had Ghul record his guitars in the Netherlands, while the bass was engineered by Teloch and performed by Necrobutcher at Lupercal Studio in Oslo, Norway. Teloch took his guitar tracking to SleikBallaMi Studio, also in Oslo. Daemon was then brought back to Stjerna for mixing and sent off to Thomas Johansson at The Panic Room. The whole affair took about three months to nail down. The result is extraordinarily intense.

“My idea was to try to capture what really is the essence of ‘Mayhem,’” says Stjerna. “This will always be something different for different people, but I think most listeners will feel quite at home with this album. This has not been about reinventing the wheel; I’ve tried to capture and enhance what makes this band unique and what makes them truly stand on top of the rest. Mayhem has gone through a lot of stages over the years, but they have a fundamental substance, which I took as my mission to conjure.”

Certainly, the art of the album cover can be hit or miss. Not for Mayhem. The Norwegians have crafted an aesthetic that’s both harrowing and insidious. From the low contrast majesty of De Mysteriis Dom Sathanas and the blurry haunt of Chimera to the suggestive intensity of Grand Declaration of War and Esoteric Warfare’s retro-modern mind machine layout, the band have always been progressively inclined where it concerns image, message, and style. For Daemon, Mayhem enlisted Italian designer Daniele Valeriani (Lucifer’s Child, Dark Funeral) to understand, conceive, and deliver the cover art.

“As he started the design, we didn’t have the lyrics or any songs ready for him to get inspired,” Teloch says. “His task was kinda impossible from the get go. We spent a good amount of time getting this right without as much as a word of lyric. As soon as we started to agree on what direction to go and he delivered some insane artwork, it was clear to us what path the lyrics should go as well. So, we did what’s opposite of normal, I guess. That’s the beauty of creativity—no rules, freedom, Satan!”

As for Mayhem’s devoted worldwide following, they’re rabidly waiting for Daemon. As always, of course. The black metal faithful spent six years without a follow-up to De Mysteriis Dom Sathanas. The evil hordes took on the cruelty of time—about seven years—for Esoteric Warfare. The five-year wait for Daemon is something they’ve prepared for, with the understanding that Mayhem, in whatever guise it presents itself, will always return greater than before, stronger than ever yet still true to its roots. The return of darkness and evil is upon us… Daemon is the return… of Mayhem!

“I think this album will be most pleasing for old and new fans,” says Teloch. “As most of our devoted fans know, Mayhem has never released two albums that sound the same. That’s the case this time around as well. As I said, we simplified stuff, but at the same time tried out some new stuff to keep it interesting for ourselves and, also for our fans that dig that we are doing something new on each album.”