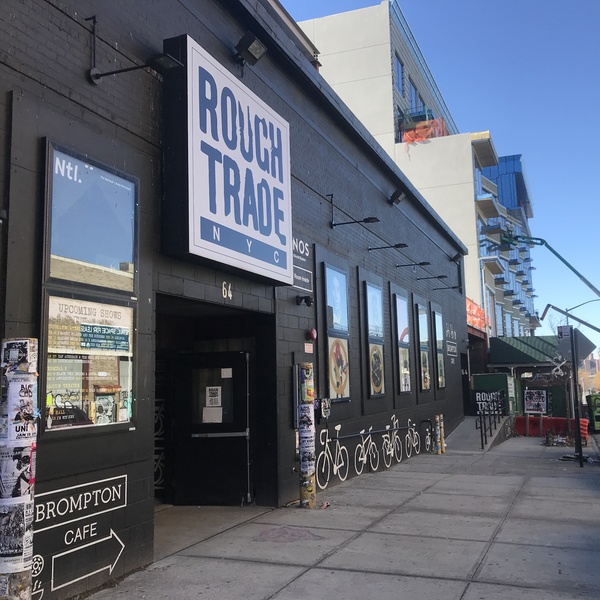 Rough Trade New York City is proud to welcome a selection of our favorite bands live in-store, for the biggest day of the year. Over 500 exclusive Record Store Day titles available to buy in store only.

This Saturday, April 21st, please join Rough Trade in celebrating the 10th annual Record Store Day. In honor of the best day of the year, Rough Trade is bringing in 500+ Record Store Day exclusives, a full day of bands, extra stock of all the classics, local partners, giveaways, and more.

WITH SPECIAL APPEARANCES BY

+ GODLIS, History Is Made At Night

In collaboration with Sonos, Rough Trade will also host an Advanced Listening Party debuting 3 must-have Record Store Day Exclusives in the Sonos Listening Room which is currently decked out with an Unknown Mortal Orchestra Sex and Food “pinkhouse” activation. Day of, the Sonos Room will be open to all customers for Sonos product demos from 12-3pm, followed by free Brooklyn Brewery beer tastings from 4-6pm.

Since shopping is such thirsty work, our friends at Brooklyn Brewery will be joining us in store from 4-6PM to pour free tastes of their Summer Ale.

On Record Store Day, the container over the entrance to the Rough Trade music venue will house a Speedy Ortiz Twerp-Verse-inspired display where in the walls will be covered with bright white stuffed animal faux fur shag and blue rain drops stuck to the walls.

Giveaways include, but are not limited to:

MORE ON THE BANDS

Fronted by 19-year-old singer / bassist Shannon Wise and 21-year-old guitarist / producer Max Shrager, The Shacks are already well on their way to becoming one of the year's big breakouts, and their remarkable debut album, Haze, solidifies their status as a band with ability to deliver on the well-deserved buzz.

Produced together by Shrager and Big Crown co-founder Leon Michels (who's played with Bradley, Sharon Jones, and Fields in addition to working with The Arcs, Lana Del Rey, and countless others), the album was recorded in bits and pieces between Shrager's basement and Michels' Diamond Mine studio, which the Observer dubbed "the Shangri La of Soul." Haze opens with the title track, which is, appropriately enough, the first song Shrager and Wise ever wrote together. It's a spare, smoky tune that shimmers and sparkles as it shifts in and out of focus, and it's an ideal gateway into the immersive world of The Shacks.

The 13 songs featured on Haze plays out like the soundtrack to some long lost 16mm film, beckoning you into their grainy, saturated world of analog beauty. In the short time that they've been together, The Shacks have already made an impressive mark. Their hypnotic cover of Ray Davies' This Strange Effect soundtracked a global iPhone commercial, one which actually stars Wise herself, and their self-titled EP earned the band dates with St. Paul and The Broken Bones, Chicano Batman, and their Big Crown Records label mates Lee Fields and The Expressions.

Since debuting in 2008, Titus Andronicus [hereafter [email protected]] has been conditioning faithful listeners to always expect only the unexpected, consistently zigging where others would zag and maintaining a steadfast dedication to fearless ambition. With the March 2 release of the new studio album A Productive Cough on Merge Records, [email protected] has executed the most shocking departure yet—but only if, as ever mercurial singer-songwriter Patrick Stickles insists, “you haven’t been paying attention.”

In a move that may infuriate the black-denim-and-PBR set, A Productive Cough finds [email protected] setting aside the leadfooted punk anthems of yesteryear in favor of a subtler, more spacious approach that pushes Stickles’ soul-baring songwriting to the fore, creating a conversational intimacy between artist and audience with which previous [email protected] efforts had only flirted.

“[[email protected]] records have always had their fair share of ballads,” Stickles explains, “but they were always buried amidst a lot of screaming. Now, they are the cornerstones. Punk rock is nice, but it is but one tool in the toolbox from which I pull to achieve my artistic purpose, and that purpose has always been communication and validation. This time, perhaps I can more effectively talk to the people if I am not so busy yelling at them.”

The mission of A Productive Cough is made apparent from the first bars of opening track “Number One (In New York).” As a twinkling tableau of piano and dulcet horns unfolds, Stickles unleashes a breathless and unceasing 64-bar verse with subject matter as sprawling as the kitchen-sink arrangement, which grows to include sparkling guitars, twinkling bells, and uplifting choral vocals as Stickles searches desperately for the strength to carry on through an increasingly violent and frightening world.

This new restraint sacrifices none of [email protected]’s singular intensity, from the merciless lyrical onslaught of “Number One (In New York)” to the blistering guitar solos which accompany the swaggering (Crazy) Horseplay of rock band workouts “Real Talk” and “Home Alone” to the disarmingly passionate commuter hymn “Mass Transit Madness (Goin’ Loco’).” Even the surprisingly groovy “Above the Bodega (Local Business)” hides, beneath its loose and spontaneous facade of zesty brass and propulsive congas, a pained admission of secret shame, despairing the challenge of keeping the dark side concealed before the ever-judgmental eye of the big city.

Across the record’s seven tracks, [email protected] remains as audacious as ever, a fact demonstrated with particular defiance by “(I’m) Like a Rolling Stone,” which, through some considerate flipping of pronouns, reimagines Bob Dylan’s evergreen anthem as a self-eviscerating confessional, a chilling reminder that when you point the finger, three more fingers point back at you.

Trachtenburg started playing as the drummer in her family’s Seattle-born group, The Trachtenburg Family Slideshow Players, who played Conan and drew the attention of Rolling Stone, NPR and Spin. Trachtenburg went on to perform in Supercute! and The Prettiots. Wooing, comprised of Trachtenburg (vocals), JR Thomason (guitar) and Rosie Slater (drums), have existed for just over a year. Trachtenburg and Thomason met while performing with disaster master R. Stevie Moore, while Trachtenburg and Slater had previously toured together in Supercute!.

The three-song EP Daydream Time Machine, produced by Bryce Goggin (Pavement, Come), Wooing covers a wide scope of material. Inspired by a documentary on LSD experiments performed on housewives in the 1950s, Trachtenburg wrote the lead single, “In Colour”, in which she beautifully croons a direct quote from the film: “I wish I could talk in technicolor.” The video, directed by John Zhao, encompasses the vintage aesthetics of the track accompanied by gorgeous, dream-like visuals. The band’s reveries, however, aren’t always sweet; “Tear World” comments on our species’ abusive treatment of whales, while “Two Can Keep A Secret” destroys the comforting facade of security within relationships, made all the more profound set against the backdrop of their upbeat and energetic sound.

Chris Stamey has participated in indie music of all stripes since the 1970s, as both a musician and a producer. His recent albums include Lovesick Blues and Euphoria, as well as Falling Off the Sky with the dB’s. As a producer, he has worked with Ryan Adams, Alejandro Escovedo, Flat Duo Jets, Skylar Gudasz, Tift Merritt, Le Tigre, and Yo La Tengo.

Bambara is a post-punk band with Western overtones that meticulously integrates layers of noise into both their live set and studio output. Originally a three-peice comprised of twins Blaze (drums) and Reid Bateh (vocals) and their childhood friend William Brookshire (bass), the band moved from Georgia to NYC in 2011 to release their debut LP Dreamvoilence, followed by Swarm in 2016. Since Reid broke his hand on stage later that year, the band has performed as a five-piece, a decision leading to the significantly more expansive and refined sound captured on 2018’s Shadow On Everything. Their pummeling and unpredictable live set has made them favorites on both under- and above-ground circuits in New York City, having impressed noise-pop auteur Angus Andrew to the extent that he asked Reid and Blaze to join Liars as members on 2017’s worldwide tour. Additionally, Bambara has toured the US and Europe extensively alongside the likes of Metz, Girl Band, APTBS, Algiers and more.

Sinkane music — every note of it — comes straight out of a generosity of spirit. Never has that spirit been on more vivid display than on the uplifting new album Life & Livin’ It. This is feel-good music for trying times, celebrating what makes life good without ignoring what makes it hard.

As Ahmed got into the depths of writing for Life & Livin’ It, he had a clear goal; to conjure the ups and downs of a universal experience, and have fun while doing it. “I would listen to my favorite records, like Funkadelic’s America Eats Its Young, and realize how great they made me feel. That carefree, light and fun feeling I was getting while writing this record is what I want everyone to feel when they listen to it."In making a record that feels the way this one does, Ahmed’s primary intention was to make music that is joyous, but also socially conscious when you scratch beneath the surface. The songs “U’Huh” and “Theme from Life & Livin’ It” conjure up the simple pleasures of hanging with friends, but there are heavier vibes in there. Ahmed says, “I remember listening to Bob Marley as a child. Dancing with my family in our living room and then my mother telling me what issues he was addressing, and that it was important to remember those things while listening. It made the music even better because it became about something more."

True to its name, Life & Livin’ It is an album about all kinds of experiences. When Ahmed Gallab sings, he sounds unafraid yet vulnerable. But while he once sang of feeling like he was on the planet Mars, Ahmed is now firmly grounded on Earth. He’s no longer searching for his home — he has created a home for himself. There’s a party there, and Life & Livin’ It is playing on the stereo. You are invited.

Under the name Lushlife, Raj Haldar has written and produced some of the most critically-acclaimed indie hip-hop albums of the last decade. His work has been featured in the New York Times, Pitchfork, FADER, Interview Magazine, SPIN, The Village Voice, and more.

Over the years, Raj has created with and produced for a wide variety of artists, including Ariel Pink, Killer Mike, Shabazz Palaces, Freeway, Styles P, Das Racist, RJD2, and more. With more than a decade of classical piano and jazz percussion training, as well as a strong composition and orchestration background, Raj creates from a far-reaching musical palette, as evidenced by his genre-bending albums.

As a DJ, he has performed to audiences in Tokyo, London, New York,.and LA -- and most recently has been tasked with programming a new, forward-thinking musical experience for the Superbowl Champion Philadelphia Eagles fans at home games for the last three seasons.

There will be queues and it will be very busy throughout the day. We cannot guarantee entry. Please make sure to get to the store in good time for live performances.

All ages and families welcome.