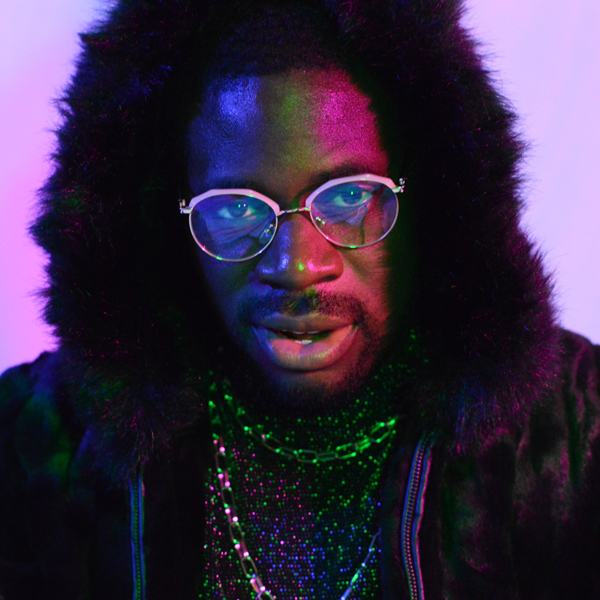 NNAMDÏ will host a special performance in celebration of his new album, BRAT, out on Sooper Records.

Preorder the album from this page to gain entry for 2 people to the in-store and signing to follow.

During the past decade, NNAMDÏ, the Chicago-based multi-instrumentalist and eternally humble visionary, has quietly become one of the most prolific musicians of the modern era. Whether under his own nameor one of the many bands he’s spent time in, there’s been an endless stream of music that NNAMDÏ has had his hands in. Pair that with the fact he co-owns his label, Sooper Records, a label that has been instrumental in launching other Chicago Artists like Sen Morimoto and KAINA,and it’d be easy to wonder how he finds time to do anything other than make music.On BRAT, the follow-up to 2017’s critically acclaimed DROOL, the new NNAMDÏ album removes the veil to show just how much effort and energy it takes to work at such a high level without any breaks. “I’d go on all these tours, pretty much every other month for the past couple years, then I’d get home and really not talk to many people. I could just feel myself not working on any relationship,” says NNAMDÏ. “I wasn’t calling friends or calling family, and after tour just getting into my own head or focusing on recording. During the process of writing some of the earlier songs, I realized I was doing that, and that I was missing out on a lot of things that are crucial to human life. And that influenced how I approached the rest of the songs. I was trying to be a multifaceted human.”That process of finding a balance between NNAMDÏ the performer and Nnamdi Ogbonnaya the person is what fuels BRAT, a record that’s still as dexterous and exciting as anything that’s come before, but is intimate and hushed, commanding a listener’s full attention from the very start. Like all things he’s done before, BRAT proves that genre classifications don’t really work here. BRAT is part hip-hop, part indie-rock, part gospel, and part West African music, and in NNAMDÏ’s hands, these seemingly disparate pieces fit together snuggly, as if there was never a question of their compatibility.Listening to the lyrics that make up BRAT, the story of NNAMDÏ’s own personal journey begins to come into focus. “This is the first record that sounds exactly like all the things I’ve wanted to make. There’s still fun, silly things, but it has really introspective parts. But it’s also a reaction to the things that have happened in my life, dealing with falling-outs with family and friends, and that influences it a lot, as well as just a general anxiety,” says NNAMDÏ. Given that he recorded everything himself, and played almost every instrument on the record, that kind of control allowed NNAMDÏ to hide things in the material that might slip past people on first listen. “There’s a mantra in a lot of the songs, the ‘I need you; Need something new,’ that’s in the background of a lot of the songs. I put that in there mainly for me. It’s not that I need someone else, but I put that in there to motivate myself to keep going. A lot of these songs are me longing to do better, whatever that means.”Taken in full, BRAT is an album built on self-actualization and a constant need to progress. There wasno goal for the record, other than to build something NNAMDÏ felt was representative of who he is, and what these last couple years felt like, as he tried to balance his own wants and needs with those of the larger world. It’s a record that, unlike many others, doesn’t try to be didactic and answer life’s big questions, but instead acknowledge those things and sit with them until they start to make a little more sense. “I hope this record makes people empathetic toward other people’s paths,” says NNAMDÏ, “To me, it feels like it could be the soundtrack to people’s growth.” If nothing else, BRAT is the sound of an artist, one who has worn many hats and expressed many different things, finding comfort in himself and his own path. In that sense, BRAT is a guiding light, the kind that shines down only when you’re ready for it.