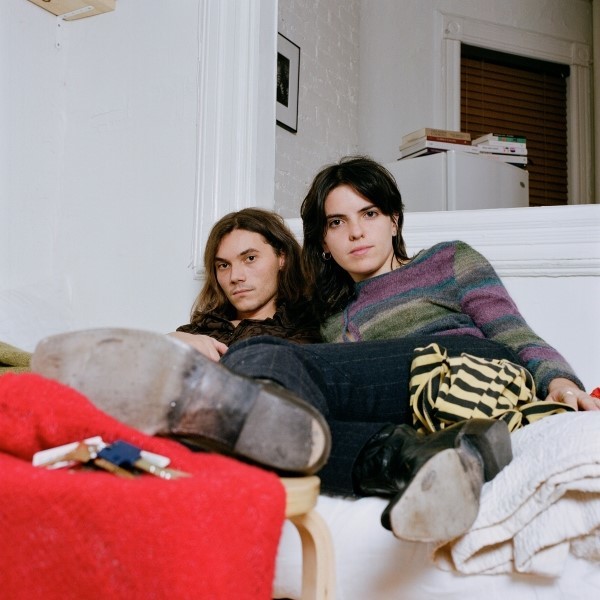 Join Purr to celebrate their new release Like New (out 2/21 via ANTI-) with a performance and signing.

FREE performance, purchase Like New on CD or LP from this page or in store for signing only

Purr began in 2017 as the second project from New York City born, raised and forever-based songwriting partners Eliza Barry Callahan and Jack Staffen. Just before graduating from college—where Callahan studied visual art and writing and Staffen, politics—the duo who had previously captured attention releasing deft, stripped down, warm-toned pysch-pop under their names, Jack and Eliza, shifted to what naturally felt like their next musical gear. If Jack and Eliza highlighted the songwriting prowess of a promising young duo, then Purr lets Callahan’s and Staffen's work bloom in the fertile ground of a fully realized soundscape. Purr builds upon an ageless, classic sound that at once looks at the past while leaning into their own, individual future - with Staffen’s and Callahan’s vocals humming at the center.

After sending around two home recordings produced by Callahan’s classmate, Sam Glick (who has played bass in the band ever since), they were offered a spot opening for Foxygen at Terminal 5, marking their second ever live show. That night, they met and gained a fan in Foxygen's front man and producer, Jonathan Rado (known for his recent production work with Weyes Blood, Father John Misty, Whitney, The Lemon Twigs). Several months later, Rado produced their forthcoming debut album, fittingly titled Like New, at his studio in East Los Angeles.

Callahan and Staffen write: “We wrote the songs that make up this album at the outset of a transitional and particularly uncertain moment in our lives. That early twenties tide change. New patterns took hold as we tried to hang onto old ones. The songs each have their own stories — but at the time they were collectively written, we were dealing with a push and pull between dependence on and independence from people we love, and coming to terms with our own self-expectations. We were resisting and (sometimes) accepting of the inevitable changes in our relationships and friendships, a moment, a specific and strange time in our lives…and, of course, in this… world. That thread was just naturally pulled through the songs.”

Like New was written in the band’s basement studio in downtown Manhattan, a repurposed storage space beneath a restaurant in the building where Callahan once lived as a young child—thanks to the goodwill of the very last kind landlord in New York City. In the territory of a New York City upbringing, Callahan sites her late close friend and old next-door neighbor, whom she met on the sidewalk when she was eight, the jazz guitarist Jim Hall, as her primary influence in music and life.

Like New is a transitional album, full of songs about shedding old patterns and old relationships to make space for what comes next. Behind its golden sheen, lurk stories of change, like the starry, piano-driven "Giant Night," (named from Anne Waldman’s 1970 book of poems) where Staffen and Callahan say they sing about “the push and pull between recognizing the natural end of a relationship while not wanting the patterns of your daily life to change. We were riffing and reflecting on a very simple sentiment: knowing someone so intimately that’s no longer around and not knowing what to do with your empty time that was once spent with that person.”

That sense of a loss ultimately gives way to rebirth. Staring down the expanse of real life, the yawning existence outside the confines of youth, can feel paradoxically claustrophobic: Purr sing of a "wall of stars" on "Hard to Realize," an image that Callahan describes as "the idea of looking up at this expansive open space, but also having it feel like something that's hard or impossible to break through."

But break through, they do. Like New is an irresistible testimony from a pair of young songwriters who are perpetually losing and finding themselves in the rush of becoming, letting go of the paths they've already tamped down and throwing themselves wholeheartedly into the thrilling unknown. The band performs as a five piece with Sam Glick on bass, Max Freedberg on drums and Maurice Marion on keys.