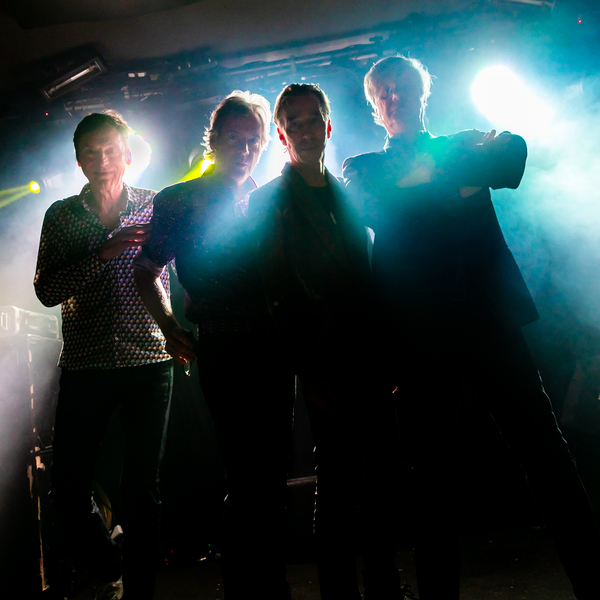 HITSBURG, USA, June 2016—Forty years ago in Queens, New York, KEITH STRENG and his buddy Marek Pakulski discovered some guitars in a basement of a house they were renting. They didn’t know how to tune strings or finger a chord, but they dug Rock & Roll and R&B, which was hard to find in the mid-1970s pabulum on Top 40 and FM radio. They picked up those guitars, found some cheap amps, and started banging out noise. By ’77, local drummer Lenny Calderon was on board as the steady drummer.

One day PETER ZAREMBA, an art student friend with long bangs, a harmonica, and a manic vision, dropped by the house, grabbed a mic, and named the band THE FLESHTONES. They rehearsed by throwing locally legendary parties in the basement of that house, dosed with fuzz guitar and trash cans full of their signature cocktail, the Blue Whale, inaugurating a bacchanal that just won’t end. Manically covering obscure songs and offering their own nervy originals, they debuted at CBGB in May of 1976.

Zaremba remembers, “We were very wound up and blasted out our handful of songs at a ridiculously fast tempo. Still, people liked us and some even danced along, an unusual event at super-cool CBGB’s. We were invited back for another audition. Finally, we were a real band.” Laughs Streng, “We were horrible at CBGB’s! But we still passed. Hilly Kristal said to us, ‘You guys aren’t really that good. But there’s something there’.”

Indeed there was. In addition to gigs at that fabled club and at Max’s Kansas City, the Fleshtones found a home at the rock/performance-art home at Club 57 on St. Mark’s Place, and in 1978 signed with Marty Thau’s Red Star Records and recorded a full-length album. The next year they released their debut single, the classic “American Beat,” and with filmmaker M. Henry Jones created an innovative and influential performance-animation video composed of hand-painted cutouts. They signed with I.R.S. Records in 1980, adding BILL MILHIZER on drums and releasing the genre-defining garage rock classics Roman Gods and Hexbreaker, with Gordon Spaeth (RIP) playing sax, harmonica, organ, and the Juvenile Delinquent with a Heart of Gold.

In the mid- and late-1980s, Zaremba kept busy hosting MTV’s Cutting Edge. Throughout that decade and the 1990s, the Fleshtones released plenty of albums and singles, toured the U.S. and Europe regularly in front of packed clubs and large festivals, and anointed nonbelievers worldwide in bar-treading, conga-line-snaking Super Rock—a greasy ball of sonic and cultural influences ranging in feel from R&B, Disco, and Lost In Space to Garage, Frat Rock, and Mexican horror flicks.

Following Pakulski’s departure in 1986, the band entertained a few bass players, including Robert Warren (RuPaul’s bassist in Wee Wee Pole), Andy Shernoff (The Dictators), and Fred Smith (Television). In 1990, KEN FOX, late from Jason and The Scorchers, joined the goofy mayhem for good, contributing pop songs, high leg kicks, and charm at the merch table, battening down the hatches on a muscular, road-strengthened, party-hopping outfit who play with the same energy, abandon, and spontaneity in front of ten people as they do in front of hundreds.

The Fleshtones are the only band to debut at CBGB in 1976 that hasn’t experienced an inactive year. They have, in one way or another, inspired countless other bands over the decades, including R.E.M., Hoodoo Gurus, and The Dream Syndicate, and their showmanship and musical influence is palpable in many current bands throughout North America, Europe, and Scandinavia. The Fleshtones have survived Punk Rock, New Wave, No Wave, Neo Garage, Post-Punk, Grunge, and more Neo Garage, never succumbing to trendiness, scornful laughter, liquidated record labels, or non-alcoholic beer. They were the first band to play at Irving Plaza and Danceteria in Manhattan as well as Maxwell's in Hoboken, New Jersey, and the first to be booked at the original 9:30 Club in Washington D.C.. They were one of the last bands to play Windows On The World on top of the World Trade Center. In between, they opened for James Brown and Chuck Berry, backed acclaimed English actor Ian McKellen as he recited a sonnet on Andy Warhol’s Fifteen Minutes, and anchored the infamous Pyramid Club in the East Village while helping inaugurate the legendary Wigstock drag queen festival.

Tick, tock there’s another day. What to do? What to say?

Tried and true American Living Legends, the Fleshtones return with their new album, The Band Drinks For Free. Hell, they’ve earned it! To celebrate their fortieth anniversary, the gravity-defying Fleshtones take stock of their remarkable career, singing about the past and the future, knocked-out at how far the decades have receded yet excited for tomorrow night’s show. Recorded at Florent Barbier’s CCP Sound Studio in Brooklyn, New York, The Band Drinks For Free is a testament to surviving with a great attitude at great odds. If there’s a theme that runs through the album it’s the bittersweet surprise of Time itself, how days and decades slip into oblivion, Kinks-ian church bells tolling away all of those hard-won hours.

The opener sets the tone, a groovy update of Ten Years After’s “Love Like A Man,” confident and swingin’, riff-driven and churning with eighth-note organ blasts and gang vocals, featuring the Bellrays’ remarkable singer Lisa Kekaula in an epic fadeout. Like that stupid ol’ sun, the Fleshtones are burning bright, shining down on everyone, and are planning to last for a long, long time. At this point there may be too many memories, melancholy daydreams, piles of bills, and unsaid goodbye’s, but the Fleshtones are glad to be living today, even if haunted by the loss of youth and by the club at closing time. They’ve learned plenty along the way, too, like how to respect love, hold on to a dream, and play the Hondells’ “The Gasser.” If it all gets too heavy and you need to get off the numbing suburban roulette, just slip on Rick Wakeman’s Cape and hit the town. Where it will lead? Well, you just don't know!

“Keith and Ken have the deep songs on the album, I tried to get very basic,” says Zaremba. “One thing about this record is that making it was fun. We had a lot of material, and it came easy. Seems like we knew what we were doing this time! It doesn't get old. This is what we really like doing. It’s a dream come true!”

The Fleshtones are back again, and they’re drinking for free. Care to join them?