An Evening with The Last Poets 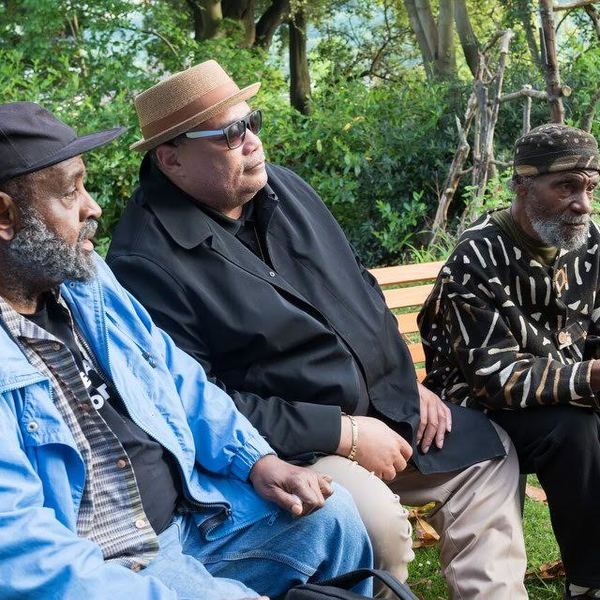 On Monday, June 25th Rough Trade NYC is proud to welcome The Last Poets for a very special on-stage performance, Q&A and album signing to celebrate the release of 'Understand What Black Is', the groups first album in over 20 years.

On the 50th anniversary of the band's inception at an event in Harlem, NY to commemorate Malcolm X's birthday on 19 May 1968, influential spoken word artists, poets and commentators The Last Poets are set to make a glorious and relevant return with their first album in over 20 years, "Understand What Black Is".

Produced by Ben Lamdin (Nostaglia 77) and Brighton legend Prince Fatty "Understand What Black Is" is a ten-track album which speaks of a revolutionary struggle defined by both race and identity, that has never sounded more relevant.

Since the initial line-up of Dahveed Nelson, Gylan Kain and Felipe Luciano formed in East Harlem’s Marcus Garvey Park, The Last Poets have produced under various guises over the subsequent years. However, it was their seminal output, namely 1970’s ‘The Last Poets’ under both Umar bin Hassan and Abiodun Oyewole that secured their legacy, becoming one of the most important influences in early hip hop.

Throughout the last 20 years, the band have remained largely on hiatus. But their influence could still be felt with their tracks being sampled by The Notorious B.I.G, NWA, A Tribe Called Quest, Dr.Dre and Snoop Dogg. Umar has recorded various solo albums and featured on Common and Kanye West’s Grammy Nominated ‘The Corner’. Abiodun appeared on the Red Hot Organization's album, Stolen Moments which was named "Album of the Year" by Time. He also conducts weekly open house poetry readings, where he constructively critiques upcoming poets, helping to nurture them. He has also conducted classes at Columbia University, where he teaches creative writing.

The inauguration of Donald Trump as US President in 2016 inspired Hassan and Oyewole to resurrect the group to create a brand new record, modern and edgy, and deeply relevant and reflective of our times.

Tracks on ‘Understand What Black Is’ include ‘How Many Bullets’, which bridles with defiance as Oyewole works through a litany of injustices suffered by black people in the US: “ You’ve Tried

To Blow My Brains Out With Bigotry, Chopped Off My Wings, So I Couldn’t Fly Free, And Dared Me To Be Me, Took My Drum, Broke My Hands, Yanked My Roots Right Up Out Of The Land, And Riddled My Soul With Jesus” ‘What I Want To See’ describes a utopia - a refuge from hurt and those who’d make “our vision blurred, and our faith obscure”, whilst the title track ‘Understand What Black Is’ aims to transcend ethnicity: “understand what black is….It’s the source from which all things come...black is a hero, not a villain.”

The album even takes reference from Prince’s 2003 album of instrumentals, ‘News’, which Hassan drew comparisons from with his own childhood experiences: “That poem took me about a year to write….I just kept writing and writing but not getting too far and then I heard that album and the musicianship was amazing. I was left wondering if it was jazz, classical, rock or maybe something new but all those images that I write about came to me from listening to that album. I loved Prince in that movie Purple Rain because my father was a talented musician but he was into brutalising Mama at times and in the movie there’s a Jerome and my name is Jerome, so it was like he was telling my life story as well.”

The album acts as a body of work between individual members each speaking of their own personal journeys, but feeding into the much larger narrative of struggle and oppression, alongside a fervent hunger for social change. These are struggles and tests of personal resolve that have directly shaped and moulded the bands’ unique sound over the course of an impressive 50 years, and their powerful and influential commentary remains as relevant as ever.

The Last Poets ‘Understand What Black Is’ will be released 18th May 2018.