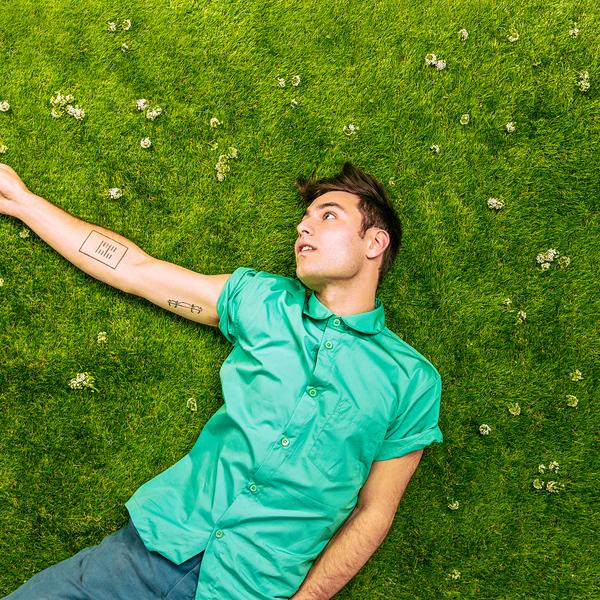 Join us on Friday, August 3rd at 5pm for a free in-store performance from Yoke Lore to celebrate the upcoming release of new EP, Absolutes.

Absolutes, the forthcoming EP of New York indie pop act Yoke Lore, explores the grey areas between black and white ideas while building upon the lush, sonic palette of his past works. The new music finds multi-instrumentalist, dancer, and visual artist Adrian Galvin polishing his heartfelt anthems and ruminating on finding balance amid respective oppositions by breaking through the notion that truth necessitates purity.

“These songs all gravitate around the struggle between two sides of something,” Galvin explains. The opening track, “Fake You,” is about the difficulty of realizing your perception of someone doesn’t necessarily match who they really are. “Cut And Run” follows, conveying the instinct to flee versus the instinct to find a home, and “Concrete” illustrates Galvin’s struggle between living in the city and being in the country. “So, they are all the conflicts of absolutes,” he states. “There must be a balance, some movement and some pull. A life of absolutes is no life at all.” As with his previous releases, Galvin drew the artwork for his upcoming EP using bifurcated lines and contrasting imagery to convey his messages of absolutes.

The former Walk the Moon and Yellerkin member’s solo musical endeavor combines echoing waves of banjo, vocals, and percussion to create unforgettable pop songs with tactile sincerity and conviction. Galvin first hit the ground running in 2016 with Yoke Lore’s debut EP, Far Shore , released on B3Sci Records. In 2017, the title track of his 2017 EP “Goodpain” hit #1 on Hype Machine, and quickly after his songs caught fire on Spotify, racking up over 10 million plays throughout the year.

Goodpain also garnered attention from major tastemakers such as NYLON , Consequence of Sound , Billboard and more. Yoke Lore toured extensively through 2017 with acts like Aquilo and Overcoats , while also making his way to the UK for The Great Escape and festivals like Field Trip in Toronto and Billboard Hot 100 in New York.

Following the success of his song “Goodpain,” Galvin was invited to Spotify’s New York City studio to record a stripped-down version the track, as well as two covers for his Spotify Singles : “Last Christmas” by Wham! and “Truly Madly Deeply” by Savage Garden. His holiday song graced Spotify’s Holiday Singles playlist alongside covers by Demi Lovato, Sam Smith, and Miley Cyrus.

After a successful first-ever run of headline tour dates, Yoke Lore found a unexpected new fan in pop idol Taylor Swift , who added his cover of “Truly Madly Deeply” to her “Songs Taylor Loves” Spotify playlist in 2018. Galvin will release his third EP, Absolutes in the summer of 2018 after a cross-country spring tour with FRENSHIP. The first two singles, “Fake You” and “Cut and Run,” are available now to stream or download online.