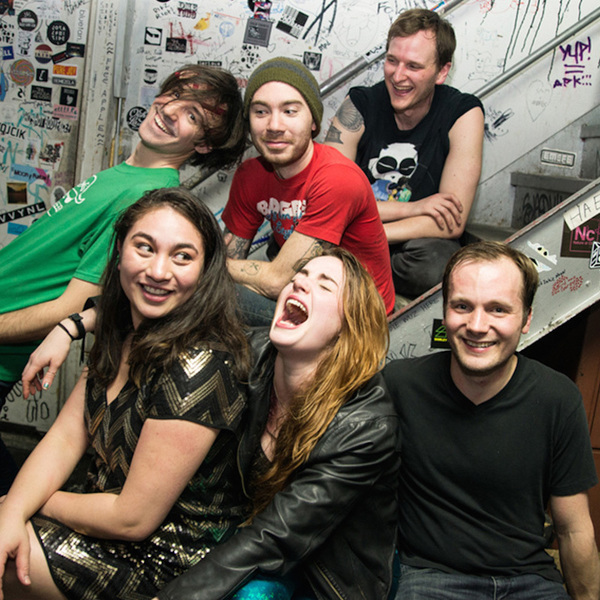 With Regret The Hour, Long Time, and Vaureen

Bred and born on the windswept shores of Brooklyn, NY, Teen Girl Scientist Monthly jangle, stomp, and spark. A frenzied friendship of rhyme and rhythm, their obituary reads "extremely happy indie rock" and some say they still haunt this barn. https://teengirlscimo.bandcamp.com/

Regret the Hour's sound swirls with chiming guitar melodies reminiscent of early U2, and a heavy, yet subtle rhythm section gaining frequent comparisons to The National and The War on Drugs.

Tragically, during those recording sessions, the band lost their beloved friend and bassist, Jesse Yanko, to stage-four soft tissue cancer at the age of 16. After a period of mourning the band released "Better Days" in 2013.

Following their freshman year of college, the band returned to the studio to record their EP, "The Far and the Near." For the sessions they connected with engineer D. James Goodwin (Kaki King, Devo, Norah Jones, the Bravery, Murder by Death) and arranger/orchestrator/bassist Sammy Oatts (Jesus on the Mainline, James Levy and the Blood Red Rose, Guy Berryman of Coldplay). In those sessions, the band crafted an artistic statement that shows their profound growth into adulthood.

The band has shared the stage with acts including punk legends The Misfits, Best Coast, Dry the River, and The Gin Blossoms. They are currently at work on a new full length album with producer/engineer Aaron Bastinelli, expected to be released in early 2018.

Sometimes the dreams of our youth are not fully realized until we embrace the reality of adulthood. We may know what we want, but we cannot will ourselves into that existence. For the members of Long Time, the journey to being the men they became involved numerous bands, jobs, and relationships, all of which transformed members Thomas John Cadrin, Colin Dinnie, and Andrew Nault in ways too numerous to count. Each success and failure helped to refine their individual worldview, and the combination of those unique perspectives has helped to create one of the most engaging and unique rock bands of the modern era.

Long Time was forged in a studio session that was never intended to be more than a one-off event. Since that time the band has worked tirelessly to craft an infectious sound that toes the line between modern rock and punk with a ferocity rarely found in artists today. With each song the New England based trio grapples with the pains of growing up and all the turmoil that such personal evolution entails without worrying about of how it will be received. Their music is their truth, and it speaks to a generation of people that fears they may be the only ones who have no idea what they’re doing. It isn’t about knowing exactly where you’re going in life, but rather being open to the boundless possibilities of the path you are on. Long Time encourage exploration in whatever form it may take and aim to provide a soundtrack for those seeking life’s next big journey.

Vaureen is a female-fronted trio that combines shoegaze, grunge and sludge influences. The band formed in 2011 when tech co-workers Andrea Horne and Marianne Do began playing music together. Cale Hand joined the band in 2015, and the following year they released Violence, a three song EP which has been described as "a spacey onslaught of melodic feedback." Their first full-length album, Extraterra, will be released in 2018.