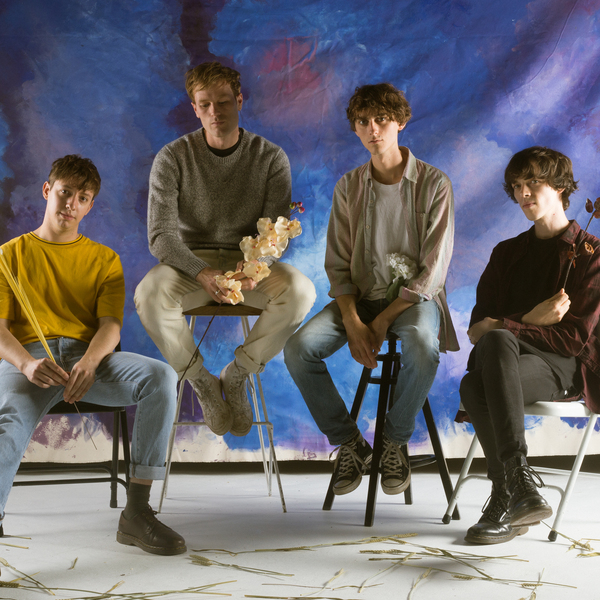 Gengahr will be live in-store at Rough Trade East, performing tracks from their new album 'Where Wildness Grows', released 9th March on Transgressive.

Human connection is at the centre of the excellent new album by North London quartet Gengahr. Their captivating 2015 debut A Dream Outside was ethereal and fantastical but here they peel away the layers over 12 tracks of expansive indie-rock. Where Wildness Grows captures one of the UK’s most exciting guitar bands blossoming into something special. “I wanted this album to be more personal than the first one,” says frontman Felix Bushe. “This feels more real and honest, I drew a lot more from myself this time.”

It began with a false start. The band, completed by guitarist John Victor, bassist Hugh Schulte, and drummer Danny Ward, arrived home after a period spent “caught up in the thrill of being on tour” – highlights included visits to Australia and Hong Kong, plus a sold out UK run with a frenzied homecoming show at the Scala – and threw themselves into the creation of their second album. They were almost a year into making it when they realised that they had probably veered off track. “I don’t think we were particularly sure what it is we wanted to do, but we had to go through the process of making mistakes to find out what it was we didn’t want to do,” says Bushe. In their minds, Gengahr wanted to make something undeniable, but ended up with a sound that was more clinical and sterile. “One of the biggest problems initially was the size of the studio,” says Ward. “We couldn’t all play together.”

And that is the key to Where Wildness Grows: it makes sense that a record celebrating human flaws and complex relationships only started to take shape when the band were in a room together, relying more on the rare chemistry they bring out of each other than studio wizardry. Starting again, the bulk of the album was done in two weeks in The Pool studios in South London with MIA and Django Django collaborator Neil Comber. Working quickly suited them. “We wanted it to be a bit looser, like a step on from the first album but not something that felt overcooked,” says Bushe. “We knew if we worked quickly, we wouldn’t have time to straighten out every wobble. It would feel more organic and more human.” Comber helped to bring out the best in them. “He’d come in to the live room and dance around while we were recording takes,” says Schulte. “A genius move.”

That spirited approach weaves through Where Wildness Grows. The shimmering groove of ‘Mallory’ led the way. “It was the song that informed how we could go about changing things from the first album,” says Bushe “It’s written like a love letter but the protagonists are both somewhat doomed. There is real tenderness in the sentiment of the song but it is underpinned with a dark and unsettling past.” Their most breezy tracks are often injected with something that turns them upside down.

The anthemic uplift of opener ‘Before Sunrise’ falls into a similar territory. “I wanted it to be pure cinematic romance met with equal measures of sarcasm and cynicism. The track itself is quite playful and I think that’s reflected in the lyrics” says Bushe

The glacial rock of ‘Is This How You Love’, which features Wolf Alice frontwoman Ellie Rowsell on backing vocals, is an “anti-love song”, whilst there’s a menacing undertone to euphoric first single ‘Carrion’. ‘Rising Tides’ mixes taut, rhythmic precision and guitars that sound like they’re bouncing off the walls of a cathedral. “That one is the most different,” says Bushe. “On the first album we had a blanket sound but on this one we didn’t want to have a go-to, get-out-of-jail sound.” The band wanted tracks such as ‘Pull Over (Now)’, ‘Burning Air’ and ‘Rising Tides’ to feel as though they could be songs written by completely different bands, and yet still be Gengahr. “It was exciting knowing that some people might hate it and some people might love it, I think that’s the thrill you get when moving out of the comfort zone.” says Bushe.

The album ends with the panoramic sway of ‘Whole Again’, a duet between Bushe and Yorkshire folk artist Billie Marten. “It has that celebratory feel to it,” says Hugh. “I think it struck everyone immediately as the album finisher,” says Bushe who wrote the song as the band were touring on the other side of the world. “It’s about the loneliness you find when you’ve spent too long away. Touring has highs and lows and after a while you can really start to miss your family and friends”

The soaring ‘Where Wildness Grows’ was one of the first songs written for the new record, and installed early on as a working title to guide them through recording. “We spoke a lot about the artwork even before we had finished writing any of the songs of the album. I’ve always been a big fan of Factory Records artwork, there’s an identity to the records they put out,” says Bushe. “We wanted it to feel like a proper body of work, where our personality is imprinted on the videos, artwork, everything.” Where Wildness Grows works as a title because the band wanted these songs to be more human, to deal with raw emotions, to have the same frayed edges as real life. Gengahr have put themselves into these songs and emerged with one of the first great albums of 2018. Out of the wildness, they have crafted something truly brilliant.