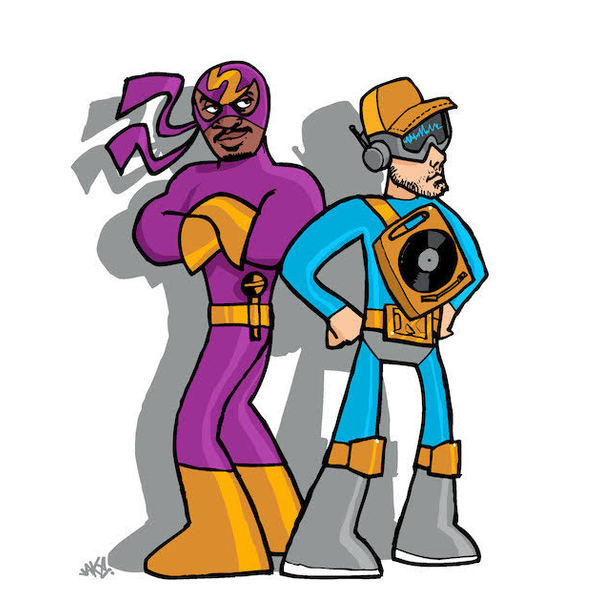 Chali 2na and Krafty Kuts will be live in-store at Rough Trade East to perform tracks from their new album 'Adventures of a Reluctant Super Hero', released 9th August on Manphibian Music.

They'll be joined by official Stars Wars illustrator JAKe, who has produced all the art for the release and will be signing CDs and LPs as well as doing free superhero drawings that attendees can take home.

After heroically launching the first single ‘Guard The Fort’ at the BBC 6 Music Festival in March, the time has come for hip-hop’s favourite superheroes to unleash their highly anticipated album. The industry’s most recognisable voice, Chali 2na, and turntable wizard Krafty Kuts have been not-so-secretly preparing this project since 2017 through over 150 live shows and countless studio sessions. The time has finally come to grab your capes, don a pair of tights and load up the turntable ready for the show to begin. This is ‘Adventures Of A Reluctant Super Hero’ – prepare for the Purple Assassin and the Scratchman as they come and save your city, the scene and hip-hop as we know it.

Set for release on the 9th August, with second single ‘Distance’ scheduled for 28th June and third single ‘Waste No Time’ coming out on the 12th July, the dynamic duo have been teasing a full LP since 2017’s ‘Hands High.’ Featuring a who’s-who of collabs and guest appearances from hip-hop royalty, this 14-track record takes you to just about every corner of the genre, leaving no stone unturned.

With Lyrics Born and Gift Of Gab joining on ‘Guard The Fort’ to deliver a serious statement of intent to open the LP, the rest of the record is an adventure through funk, breaks, rolling basslines, buckets of groove and everything in-between. Throw in a generous portion of expertly delivered bars and vocals from genre sidekicks like Harry Shotta, Skye (Morcheeba), Omar, Dynamite MC and more, and you’re left with a hip-hop record that not even the comic books could have conceived.

Between them, Chali 2na and Krafty Kuts have worked with the best of the best – from Jurassic 5 to The Prodigy and even performing alongside The Rolling Stones, so it’s no secret that their collaborations are recognised at the highest levels of the industry and this album is no exception.

The two vigilantes will also be flying from town to town fully equipped with vinyl crates and a mic over the summer. The crusade will be taking hip-hop back to its roots over the next few months, with plenty more dates to be announced – so stay tuned!

Worth Fighting For (Ft Omar)