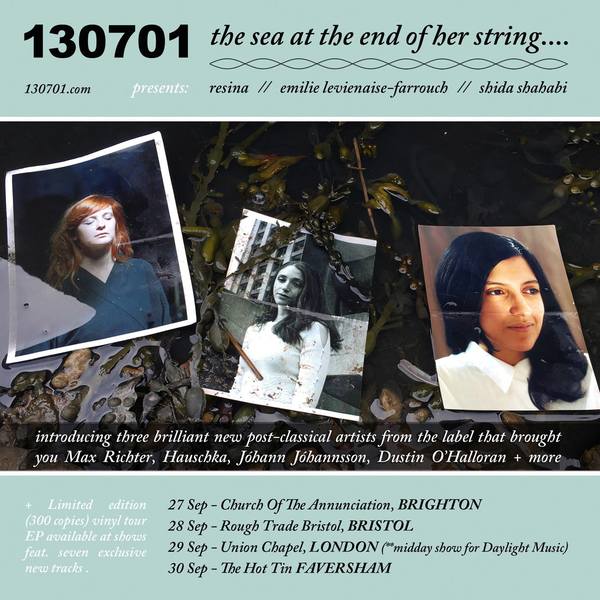 
"130701 can arguably lay the claim to having paved the way for the current generation of artists blurring the boundaries between classical composition and electronic aesthetics." (Inverted Audio)

"[130701] has remained at the forefront of a post classical movement which remains focused on musical output and quality rather than hype or anticipation. A label built for the artists who seek to break the boundaries and limitations of genre... " (Ransom Note)

We are excited to announce ‘The Sea at The End of Her String’ - a triple-bill of three adventurous, highly talented young female artists from FatCat’s pioneering 130701 imprint (now based in Portishead). Having existed since 2001, 130701 was set up (at a time way before it became popular or even recognised as a genre) as an outlet for new music based around artist’s using classical instrumentation in new, non-classical ways, and became a home to some of the most recognisable names in the now broad-reaching post-classical field, introducing the likes of Max Richter and Hauschka, as well as becoming a home for pianist / composers Dustin O’Halloran and Johann Johannsson. In the last few years, the imprint has renewed itself and expanded its scope, signing a number of new artists and becoming a full-time concern. This year, the label’s first four album releases all come from female artists and we are excited to introduce three of those on a short set of UK tour dates, alongside which we have produced a limited edition (300 copies) vinyl EP, featuring two exclusive tracks from each artist.

Resina is the alias of Karolina Rec, a Warsaw-based cellist and composer and a compelling live artist. Karolina's style is characterized by personal language of improvisation and an alternative approach to melody, using non-obvious characteristics of the instrument alongside electronics and her stunning voice. She has played throughout Europe, developing into an increasingly powerful performer supporting the likes of Sarah Neufeld, Godspeed You! Black Emperor, Owen Pallett, Hauschka and labelmate Ian William Craig. Resina’s music has been described as “haunting” by The Guardian and “ineffably beautiful” by Tiny Mix Tapes, whilst Self-Titled recently described her as offering a “mesmerizing take on post-classical music... that’ll leave the hairs on your neck standing straight up."

An award-winning French pianist/ composer currently based in London, Emilie Levienaise-Farrouch's music spans film score, bespoke composition and sound design. Her work is connected both by its high quality and its evocative, meticulous craft – a common sensibility of elegant, instinctual composition. Having studied a Masters degree in composition at Goldsmiths whilst working for three years at online electronic store Bleep, these experiences show through in Emilie’s music, described by Tiny Mix Tapes as “stunning.... rich in reverb and resonance, sublime in the language its piano articulates, limned beautifully by orchestral and electronic ambience... melodic, graceful, eloquent, compelling." Exclaim! Described her as “quickly establishing herself as an important new voice in contemporary music. Her compositions for piano, viola, cello and electronics combine tender solo performances with rousing arrangements... Her exacting style produces a fully formed, gorgeously crafted result."

Shida Shahabi is a Swedish-Iranian pianist / composer, currently based in Stockholm, whose debut album is set for release this October. Shida studied piano from the age of 9 and began writing melodies on the instrument as soon as she could compose with two hands. Since finishing her studies at The Royal institute of Art in Stockholm in 2013, Shida has made site specific sound installations, played in numerous different bands/ constellations and written music both solo and for dance, film, theatre and fine art contexts.
Shida signed to 130701 earlier this year, having blown the label away with the dreamy, homespun charm of her album demos. Fans of the likes of Nils Frahm, Goldmund, Dustin O'Halloran and Erik Satie will find something to fall for here.