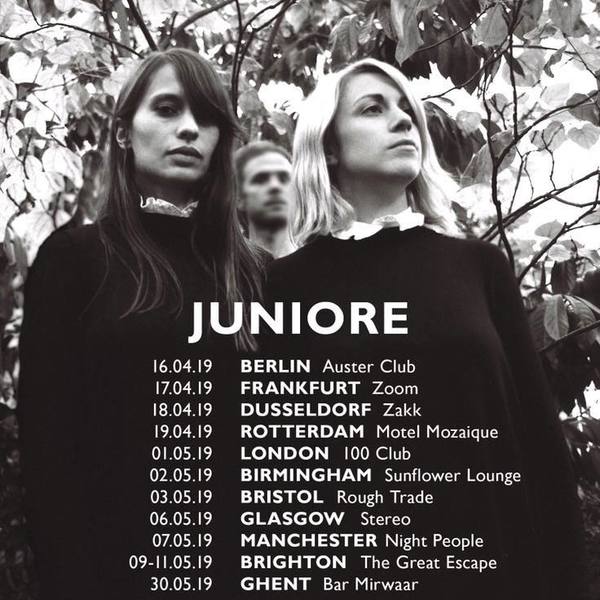 We're delighted to bring Juniore to Bristol! The band have been playlisted all over 6Music, been added to tonnes of festivals and just recently came off tour supporting The Dandy Warhols on their 25th anniversary tour. If you like a 60's French twist on the garage psych sound and you ain't afraid to dance then Juniore may just be the band of your dreams!

“I realised my friends were mostly females and fell in love with the idea of a girl band of sorts, like the 60’s groups I grew up listening to,” says Juniore’s Anna Jean. “That’s what I wanted most. A kind of sisterhood, made up of plenty of interesting and talented women. And of course, to write music, connect, and share it with the world.”

The result that this sisterhood produced is a dreamy kaleidoscope of sounds that Jean playfully labels “yéyé noir”. As displayed on their debut album, the Paris group also explore surf grooves, sunshine pop, sizzling psychedelia and garage rock. Whilst the music is buoyant, sleek and undeniably sexy in its skip
and beat, it contains a lyrical depth that nestles deeper than the good times vibes of the sonics. “A lot of our songs are about love - mostly breakups, walks of shame, bad surprises or, in other words, unhappy love affairs,” says Jean. “I liked the idea of playing upbeat music to dark lyrics. There’s something about the contrast, the irony of things, the paradox of feelings.”

While you will need to be fluent in French in order to understand the lyrics, there’s still a creeping sense ofmelancholy in the tone that makes the emotion within the songs feel universal. For Juniore, the
exploration of French culture and heritage has also played a part in forming the identity of the band. “It’s been really nice to listen to interesting, innovative music in French, influenced by France’s musical history. I think the music we make comes from the same desire to pay homage to this history - in this sense, we feel
a kinship to bands like La Femme or The Liminanas.”

For the album, Jean worked on most of the songs in her attic on an acoustic guitar, writing songs inspired by everyone from Dario Argento to Francoise Hardy to Screamin’ Jay Hawkins. She then took them to her band, consisting at its core of Swanny Elzingre (drums), and someone called the Thing on bass. Here the songs were brought to life through personality implants from the rest of the band, not simply filling out Lean’s songs but adding a new dynamic to them altogether, as she explains. “I try to inject something of the band member’s personalities in every song. Either in the stories we tell or in the music itself. Be it Swanny’s mermaid-like vocals, her delicate and rough beats, her passion for African music. It adds depth to the songs I bring out of my solitary room.” The subjects and sounds that the band cover is vast, from beachy moods to urban Nouvelle Vague atmospheres, along with a touch of spooky vibes. The new son ‘Magnifique’ is a celebration of beautiful losers and how it’s their time to shine.

The end result is an album that radiates a potent sense of vibrancy, endlessly entrapping the listener in itsseamless melodies, immersive harmonies and unshakable grooves. A French language record influenced by obscure horror films and unhappy love affairs may not sound like a joyous and life-affirming record but
the charm and skill of Juniore is taking something specific, niche, personal and unique and making it universal, something for which language no barrier. For Jean, this idea of connecting people through music is what drives the band and this record. “We hope this album will give us a chance to meet more people, spread the love.”

Juniore likes to change shape – sometimes a three-piece band, sometimes four or more. Needless to say, it’s with a French je-ne-sais-quoi that Juniore cultivate their sense of style. Hedi Slimane from Saint Laurent chose the band to be part of his Music Project –photographs of musicians taken all over the world. On stage, Juniore wears dresses from Paco Rabanne, a mix of Françoise Hardy and Wednesday Addams. Their music has been chosen for Dior and Sarenza commercials, among other brands. The girls from
Juniore also appear in a music sequence of the film Les Fauves, directed by Vincent Mariette and starring Lilly Rose Depp, that will be released at the end of 2018.

Juniore has spent the last few years touring France but also, Spain, Switzerland, Germany, Belgium, Turkey, Japan, America, Canada and recently Australia. After two 7 inches released in 2015 (Le
Phonographe/A+LSO/Sony France) an EP and a cassette on Burger Records in 2016, their first album Ouh Là Là (Le Phonographe/A+LSO/Sony France) was released in France in 2017. A cassette version of the album was released on Burger Records during Summer 2018, during their US mini tour. A 10 inch compilation « Magnifique », was released in the UK July 2018 on Outré, and playlisted as Album of The Day on BBC6. Juniore will be opening for Miles Kane for his European shows in October and will be touring in the UK and Germany during the Fall. Their second album will be out in 2019.