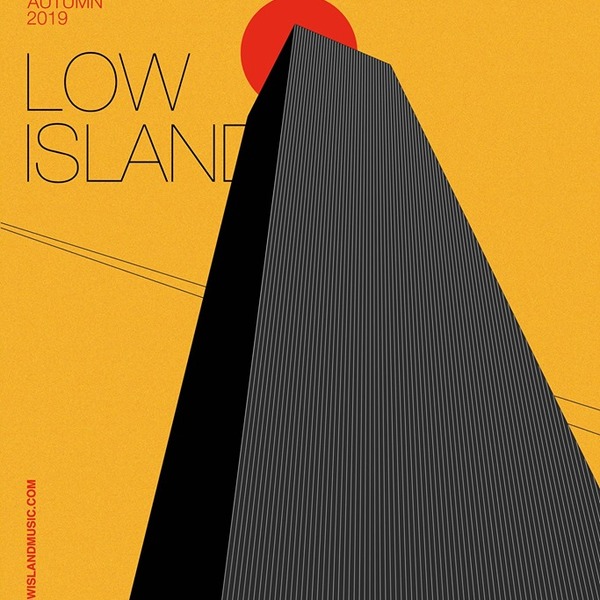 Low Island are an Oxford-based electronic band featuring multi-instrumentalists/singers Carlos Posada and Jamie Jay, bassist/keyboardist Jacob Lively and drummer/percussionist Felix
Higginbottom. All childhood friends (Lively and Posada go the furthest back, having known each other since the age of 5), Low Island are a band literally a lifetime in the making, playing music
together in various combinations since first meeting each other, before finally settling with the current lineup two years ago.

The band come from a generation with a unique perspective: one that grew up first without, then with, social media, and one that became ‘politically conscious around the time of the ‘08 financial crash, with the subsequent political disintegration that has followed’. These issues, as well as the trials and triumphs of love and the neuroses that have become synonymous with millennials, are the principal subjects of their lyrics and the themes that run through their self produced music videos. Locked away in a small garage on the outskirts of Oxford, they have spent the last two years honing their electronic-driven sound.

They grew up in a small but not insignificant local music scene. At the age of fifteen, when they started to play shows in Oxford, Foals had just released their Hummer EP, followed by debut album Antidotes, with Radiohead having released In Rainbows only the previous year. The band cite these two years as formative musical moments: the ferocious energy of Foals’ early live shows in Oxford, coupled with the band’s discovery of the emotional and sonic richness of Radiohead, captured their imagination and provided an inspirational bedrock. The shadows loomed large, and led somewhat inevitably ‘to a variety of pale imitation projects destined for the scrapheap’. A few years later, they found their way to Melt! Festival, fully in the throes of electronic music and hooked by the beats of DJs like Ricardo Villalobos and Four Tet. But it wasn’t until seeing LCD Soundsystem a little further down the line that a vision for the band finally crystallised; electronic music that was really live, ambitious in arrangement and songwriting, and not afraid to jump from dance to intimate ballads via a route of experimental
jazz-infused jams.

To say it took them a fair amount of time and exploration to reach this understanding would be an understatement. After leaving school, they went to universities in different cities, playing
together all the while, but also learning new musical skills. Higginbottom spent time in Brazil, studying percussion in samba schools, as well as touring with world-renowned jazz artists in
America. Jay and Posada became immersed in dance music, taking up a DJ residency at The Warehouse in Leeds, whilst Lively became well-acquainted with London’s toilet venues, honing his bass-playing skills. Jay and Posada also found themselves composing music for dance, short films and theatre, learning and exchanging ideas with people from across the artistic spectrum, and allowing them to bank some ‘important early experience in doing vast amounts of work
for absolutely no money’.

After finishing university, they regrouped, and have spent the last two years weaving together their wide musical influences. The result has been three critically acclaimed EPs spread out across the three years that they have been releasing music. Their first EP, Just About
Somewhere, saw the band combine fragile songwriting with off-kilter electronics. Debut single ‘Anywhere’, described by The Line of Best Fit as ‘sublime’, was quickly picked up by Radio 1’s Huw Stephens and Phil Taggart, as well as being recognised by Spotify in playlists both in the UK and across the pond. Accompanying the release was a short film produced by the band that deftly worked its way through all four songs on the EP. Described as ‘stunning’ by The Independent, the video explored the simultaneous feeling of claustrophobia and isolation that can be engendered by urban life. The EP continued to garner attention, leading the band to be
included as first on the list in an NME article of ‘new bands that Radiohead fans will go totally mad for’.

As the band grew in confidence, so did the music. Their second EP, In This Room, included singles ‘Holding it Down’ and ‘That Kind of Love’. Both songs continue to be fan favourites, with the former reaching number one on Amazing Radio’s chart of 2017, and the latter playlisted on Radio 1. ‘Holding it Down’ was accompanied by a video, produced by the band and directed by Roland Walters. Based on the account of the disgraced communications director Justine
Sacco from Jon Ronson’s So You’ve Been Publicly Shamed, it explored the idea of shame in the era of social media, and was described by Crack magazine as an ‘impressive mini epic worthy
of your attention’. The band grew their live profile too, embarking on their first UK tour including sold out dates in Bristol and London, and making appearances at Latitude and Reading & Leeds festivals.

Their third and perhaps most ambitious EP, This Other Life, followed, and was made up of six tracks. It covered everything from dance music to the more intimate-ballads that have become
a trademark part of the Low Island sound. It explored a range of subjects, from populist politics (The Lines), the impact of technology on mental health (The Whole World Tucked Away), and love (Tomorrow); and was praised by publications for its ambition and invention. It led to them playing a sold out show at London’s Scala, and a Maida Vale session for Radio 1 with Huw Stephens tipping them as one of his alternative acts for 2018. Support also came from Annie Mac and Phil Selway of Radiohead, who included ‘I Know You’ on his 6 music show, with the band making further festival appearances at Womad and Kendal Calling, as well as their first
European shows at Primavera Club, Barcelona and Lollapalooza Berlin.

Towards the end of 2018, they brought together these three EPs as a standalone Low Island and Friends 17-18 vinyl release. In their words, ‘this was not an album’, but rather a way of ‘contextualising and taking stock of our journey so far’. It included a re-recording of ‘Holding it Down’ made alongside Matt Wiggins (Glass Animals, The Horrors, Lorde), new track ‘Hot Air’, as well as a remix from Totally Enormous Extinct Dinosaurs and three bonus tracks deriving
from collaborations that had formed essential parts of their London headline shows.

Maintaining that spirit of collaboration, present in all of the band members’ past experiences, has been one of Low Island’s priorities. For the tour that followed their third EP, they collaborated with different artists in each city, showcasing the work made at the shows; a process that was made into a short-form documentary by DIY magazine. As well as this, they soundtracked UAL’s final showcase catwalk; they wrote an original score that accompanied a
new piece of choreography performed at The Place in January ‘19; and they have worked with fashion designer Rosa Avilez on bespoke outfits for their latest performances. Collaboration
has, in their own words, ‘enabled us to learn and develop relationships outside of our own creative bubble (and gives us a break from arguing amongst ourselves)’.

Spring 2019 saw Low Island embark upon their most ambitious UK tour to date, as well as play a string of shows supporting Crystal Fighters in Europe and at London’s Brixton Academy. The band also released single ‘In Person’, co-produced with Miles James (Obongjayar, Nao). Representing a commitment to the more electronic side of their sound, the single was picked up by Lauren Laverne and subsequently playlisted on 6music. The song fused ‘70s-style analogue recording with a prescient subject: ‘the paradox of drifting apart from people as you grow up living in an increasingly connected world’. A remix package, including reworks from
boundary-pushing Matthew Herbert, Percolate residents Krywald & Farrer and Low Island themselves, was released in May 2019.

Their next single, Search Box, ‘inspired by the idea that Google has become the world’s therapist’, was released in June alongside a self-produced music video and ‘Search Bot’ on the band’s website. The video featured a lone mouth (Posada’s) that buckled and contorted under the weight of the repeated questions in the song’s lyrics. Included in Spotify’s ‘The Indie List’, ‘Fresh Finds’ and ‘Hot New Bands’, 6music’s Tom Robinson described how the track ‘almost made me fall of my perch. We’ll have Low Island rocking the pyramid stage yet, mark my words,’ while Radio 1’s Jack Saunders lauded its ‘post-punk lyrics’.

After playing slots at festivals including Glastonbury, Wilderness, Latitude, Open Air Zurich, Lost Village and Kendal Calling this summer, the band will take to the UK this autumn for their 4th
headline tour entitled ‘Shut Out the Sun’. The tour takes its name from Michael Zielenziger’s Shutting Out the Sun which details the experiences of the Japanese Hikikomori: a generation of mostly young men who have shut themselves off from society because of perceived failings in their lives. Speaking of the tour, the band say:

‘The Hikikomori represent one extreme response to modern anxiety. The other is escapism. Shut Out the Sun is evocative of both; alone in your bedroom or immersed in the club. It’s a duality that we’re always trying to convey in our music.’