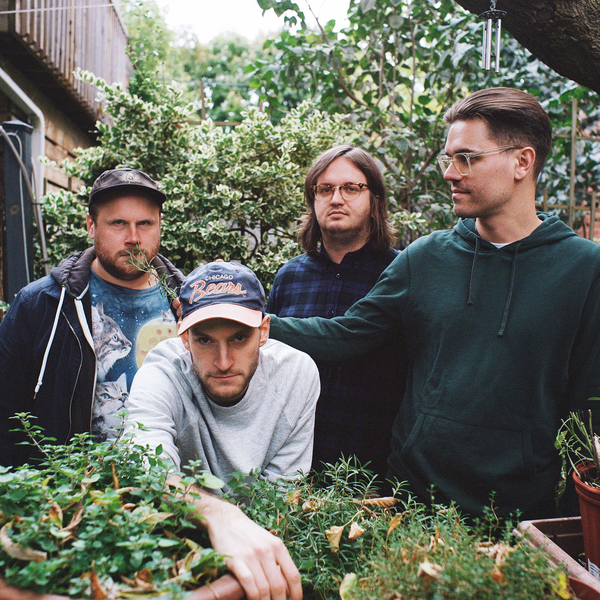 “Scorpion Hill”, track five on PUP’s newest record Morbid Stuff, rings out, “I’ve been having some pretty dark thoughts. I like them a lot.” That fucked-up, sick-in-the-head point of view sums up the album perfectly. It’s a black comedy. It’s a snuff film with a laugh track. To PUP, life is a cruel joke, but it’s a good-ass joke tho.

Stefan Babcock, Nestor Chumak, Zack Mykula and Steve Sladkowski – the four lifelong friends who comprise PUP – have a mantra: Life is shit, find the light. And it works! With two critically-acclaimed albums and five years of touring under their belt, PUP are now world-renowned for turning inner darkness into recklessness and pure fun. On Morbid Stuff, PUP doubles down on that dichotomy and blows it up projection-style, onto the biggest wall possible, teetering in plain sight between gleeful chaos and complete despair.

The album was written and recorded over a half year span in Toronto, and was produced by their longtime friend Dave Schiffman (Vampire Weekend, Weezer, The Mars Volta). It was the longest the band had ever spent writing or recording and, in fact, was the longest period of time they'd spent at home since starting this band 5 years ago. "We were really proud of what we did on the first two records, but they were both really rushed," says drummer Zack Mykula. “On The Dream Is Over, we were scrambling between tours to flesh out songs and record an album. We didn't want that to happen again”. This time they spent months in the basement, no breaks, 7 days a week, trading off between laughing til they cried and plotting each others' deaths.

The album kicks off with the title track, a laundry list of evil thoughts that rattle through singer Stefan Babcock’s mind daily. It moves on to “Kids”, a song he affectionately refers to as, “a love song from one nihilistic depressive to another.” The lyrics dance from song to song through heartbreak, broken dreams, hating yourself, and castigating yourself for thinking you matter enough to even bother hating yourself.

That spiral of negative thinking and depression is a daily struggle for Stefan. He’s tried everything – therapy, exercise, meditation, the South Beach Diet... The only medications that truly work, though, are laughing at himself and celebrating his misery with his best friends. “It’s funny, because when I’m writing alone, most of the songs start off in a bad bad place emotionally,” Stefan recalls. “I’m just sorta probing the darkness. But by the time the band is through with them, the darkness starts to feel real good. Like we’re all celebrating how fucked up everything is. I guess when your day job is hanging out with your friends and trying to do something productive with your self-destruction, the whole thing can start feeling pretty weird and pretty hilarious.”

Finding humor in the heartache is a pretty steady theme throughout Morbid Stuff. And for Stefan, the sickest joke of all is his own career, which he tears into with full abandon on the record’s heaviest song, “Full Blown Meltdown”. “I’ll be sure to write it down when I hit rock bottom,” he howls. “For all the people who love to fetishize problems // And to tell the truth, I fetishize them too. It’s pretty messed up, isn’t it?!” How ridiculous is it to make money writing about being a fuckup? If there were any justice, you would at the very least be scolded for ruining your own life. But PUP is now three albums deep into a successful music career while never writing a single song about doing things right.

That annoying paradox is acknowledged over and over again on Morbid Stuff, as the band tackles what Stefan repeatedly refers to as, “A hell of his own making”. He says it plainly on the irresistible garage banger “See You At Your Funeral”, and alludes to it again on “Bare Hands”. The final slow-burner track, “City” creeps along sinisterly for almost half the song until it explodes with Stefan roaring, “When I try to claw out of the pit, all I do is get sucked back in // Don’t wanna love you anymore, but I just can’t help it.”

Anyone who hears that song will notice the self-deprecating, self-aware nature of this band. It's four guys in emotional ruin finding humour and catharsis in the turmoil. The coldest truth presented on the entire album might be just that: having problems is funny. Sure it sucks, but it's so, so funny. When you're truly depressed, your life becomes a caricature of itself, your reactions Shakespearean. You're a moron with a dumb brain that hates living for no reason, but if you’re one of the lucky few, you can laugh at how absurd it is to not enjoy life.

And that's the record. It's sadness, realizing you created that sadness yourself, and cackling in the dark at your sadness. Morbid Stuff is the most insightful, sweetest, funniest, grossest, angriest, saddest and most inescapably desperate collection of songs PUP has recorded to date. It's all the fury and celebration you've come to know, but rooted in an understanding of where that fury comes from. If their 2014 self-titled record was the fuse, and The Dream Is Over was the bomb going off, Morbid Stuff is your family sifting through the rubble, only to find you giggling while you bleed to death.