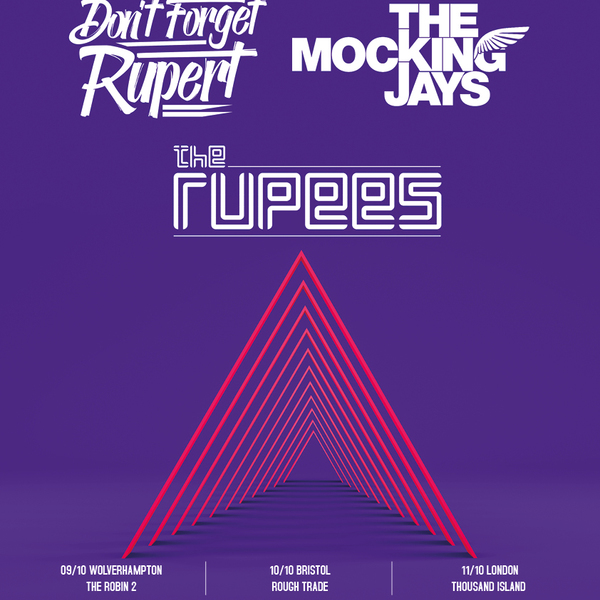 With support from The Mocking Jays and Don't Forget Rupert, The Rupees head out on their first UK tour.

Bringing their high octane energy and passionate performance, Rough Trade Bristol will be set for a raucous battering of aggressive guitars and in your face vocals. With support from Don;t Forget Rupert and The Mocking Jays

For songwriter Ryan, the meaning behind The Rupees music is simple - ‘No messing about and nothing plastic, we’re making music that is going to make you move, sing, and lose yourself in. Escape the 9-5, escape everything for a while and be somewhere better’.

The Rupees are a rock n roll band from Bristol. Their distinctive and unique sound is a wall of snarling vocals, atmosphere defining synthesizers, grizzly guitars and thunderous rock grooves that culminates into nuclear mutation of Kasabian, The Black Keys and The Clash. The songs are an enticing soup of curt attitudes, titanic choruses and driving upbeat energy.

Ryan, Seamus, Jake and Tom are The Rupees and their music has already been showcased on BBC Radio 1 (Huw Stephens), BBC Radio 6 (Steve Lamacq), and Sky TV. Having played Reading Festival, supporting bands such as Blossoms and The Growlers and selling out their own headline shows, the guys are making some serious noises and are clearly ones to watch.