This event is now completely SOLD-OUT! There will be no more album/ tickets made available. 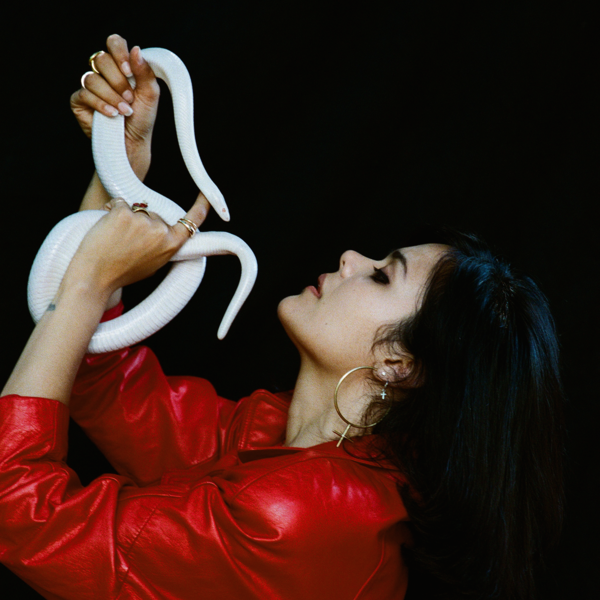 Bat For Lashes will be live in-store at Rough Trade EAST, performing and premiering a very special stripped-back synth and vocals set, in anticipation of her incredible new album 'Lost Girls', released 6th September on AWAL Recordings / Bat For Lashes.

Pre-order the ALBUM / TICKET to guarantee your place and entry to this live stripped-back in-store performance on 22nd August. Your 'Lost girls' album will then be ready for you to collect in-store from Rough Trade East at 9am on album release day, 6th September.

*Please note - there is no signing for this event.

Driving through the mountainous LA deserts at night-time, everything can feel a little surreal. The sky is impossibly vast, streaked with orange and pink; the horizon looks like it's been cut out of a movie set. If you stare into the desert too long, you might start to see things emerging from the mist.

When Natasha Khan writes music, it's an accompaniment to the movie scenes playing inside her mind. A student of film, she weaves narratives and grand, romantic panning shots through every chord and lyric she writes as Bat For Lashes. Each of her albums, since 2006's Fur and Gold, has had its own distinct visual identity – as well as musicianship that has earned her two Ivor Novello awards, and three Mercury Prize nominations – culminating in 2016's tragic The Bride, which told the linear story of a bride losing her fiancé and learning to love herself. Returning with her fifth record, Lost Girls, this time Khan delivers a noir-ish, supernatural night-riding adventure set under LA's dusty skies; a story of magical fantasy and earthly romance, told in the grainy style of a 1980s VHS.

"In the '80s, there was a big theme of paranormal activity and science fiction," Khan recalls of the movies that defined her coming-of-age, like ET, or The Goonies, or basically anything with wide-eyed magic from director Steven Spielberg and composer John Williams. "It was a really beautiful thing to have as a kid, when your imagination is so alive. Especially in times of trauma and pain. The kids in those films are always wanting to connect and attach to something that's greater than themselves, something magical, elevating them out of this painful domestic situation."

Lost Girls breathes, long and slow, with the same energy as a power chorus under the rolling credits of one of these movies. It's a liberated feeling that came from several changes in Khan's life. After the release of The Bride, having completed her ten year deal with major label EMI, she moved from London to LA, a more "sprawling, lonely" city, but one full of sun and open space. Rather than more music, she set out to make films. She developed scripts while taking meetings with production companies (including Barry Jenkins' PASTEL), and it was while developing an idea for the latter, about a vampire girl-gang, that Lost Girls began to emerge in moonlight studio sessions.

A freshly independent artist, Khan was able to create freely, taking a year and a half to finish the record. "I didn't realise, but I'd gotten into this position where I felt very pressured," she says. "[I realised that] now, I can make an album off my own back." Together with writer and producer Charles Scott IV, she crafted the album nocturnally, with a private, insular process that turned out to be the most fun she'd ever had recording.

Lead single 'Kids in the Dark' is a gauzy power ballad that stretches out like a shadow in the evening sun – but while it sounds luxuriously gradual, it was written in a single day. Writing it made Khan realise that "living in LA, driving around in these peachy sunsets, falling in love, being in the car at night, winding the windows down, all the hot air and the neon, the mountains – all this stuff was permeating my consciousness, and making the most romantic impression." The song's lyrics tell a fragment of the story about Nikki Pink – the protagonist of Khan's girl-gang movie – falling in love. "The lyrics describe the nights they're having together, where they're just leaving the world behind and becoming little kids again. It's a song about nestling and unfurling into something safe with somebody – even though these [vampires] are probably going to be coming soon to get her."

The album, like the single, balances that sense of liberated, youthful exuberance with a dark, threatening pulse just under the surface. Nikki falls in love, while also chasing (and being chased by) a bike-riding, vampiric girl gang. For Nikki, the story is about how she "straddles both worlds" – the earthly and the supernatural – and for Khan, it's also about learning to embrace both the rational and the unconscious. "The point of the story is that, in order to have the right relationship with people in life, you have to regularly dive into the unconscious," says Khan. "Dive down and sit with yourself, and right the wrongs with yourself, and nourish the well of creativity, and be marinating in the subconscious... it's so important that you keep doing that, otherwise you'll dry out, and then you're no good to anybody." If The Bride was about learning to love yourself, Lost Girls is its more outward-facing cousin, encouraging you to seize life with both your head and your heart.

That theme plays out against a playful sonic backdrop, with arpeggiated synths and power drums evoking '80s cinema alongside a playful strain of Iranian pop melodies – influenced by Khan's love of the Iranian vampire movie A Girl Walks Home Alone At Night – and traces of "the heady, intoxicating feeling of Pakistan". As a London-born child, Khan would spend long summers in her dad's native country while growing up, watching her older cousins discover American culture as they rode motorbikes and swigged from bottles of Coca-Cola. "When I was here [in LA], feeling the heat, the smell of jasmine, the city lights, it was very much like Karachi. It brought back these Middle Eastern ghosts, [memories] of being in Pakistan as a kid."

Those Middle Eastern synth patterns pulsate in particular on 'So Good', a low-riding song about an elemental pop feeling ("Why does it hurt so good?" she intones on the chorus). Together with 'Vampires', which brims with swaggering saxophone, Khan adds long, striding solos to her songs that she says are "tongue-in-cheek – there's performances on there that I never would have dreamt of doing before, but they're just really fun and sexy, and there's a sense of humour in those."

Elsewhere, 'Feel For You' is a Bananarama-channelling jam that Khan says is the biker girls' theme song, with scratches of funk guitar, strutting drum patterns, and a timeless sing-along chorus. Then there's 'The Hunger': a powerful, mystical anthem, spilling out across five precisely crafted minutes. "I started that song with this organ sound on a really old '80s synth," Khan remembers. "Then Charles brought in his bass, and every time we were adding more and more stuff it was getting closer to this particular feeling that I wanted. There's nothing like this feeling of translating something that's in your DNA, part of who you are energetically, coming out in music. Like it matches a thumbprint inside of you."

The process of writing Lost Girls was the first time Khan has worked this way – rather than crafting demos in solitude, she opened herself up to back-and-forth collaboration, and allowed improvisation and playfulness to make its way onto the album like never before. On previous albums, she admits, "I had a lot of demons I wanted to explore – The Bride was an album about grief and sadness, and it was just the right time for that to be expressed." But now, liberated and in love, she's made what she (almost) calls her "guilty pleasure" album. "It's not so much guilty," she clarifies, "But it was more of an outright pleasure, in terms of not having to cathartically work through something heavy for me. It feels much more generous, in terms of the way it sounds. Sometimes it's guilty, because I think a lot of artists think you have to suffer for your art, it has to be hard. But I enjoyed this so much. It's been so easy – and so fun."