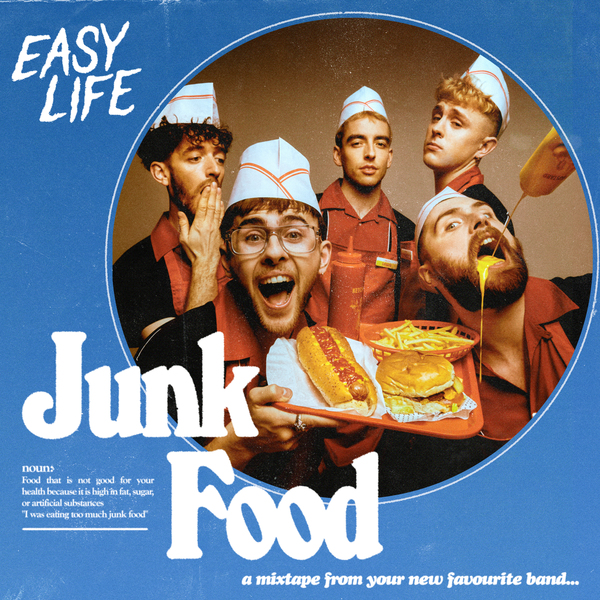 DUE TO POPULAR DEMAND AND WITH THE 7pm RT EAST IN-STORE NOW SOLD-OUT, WE HAVE ADDED THIS 2nd SHOW, A LUNCHTIME 1pm IN-STORE SESSION WITH EASY LIFE LIVE AND SIGNING AT ROUGH TRADE EAST.

Easy Life will be live in-store at Rough Trade EAST, celebrating the release of the 'Junk Food EP', released 10th January on Island.

Easy Life have announced details of their forthcoming ‘Junk Food’ Mixtape which will be released on Island records on January 17th. In addition, they have dropped a brand new song 'Sangria' (ft. Arlo Parks) which unites two of the most exciting acts breaking out of the UK right now in a brooding blend of soulful hip-hop, smooth R&B, and disarmingly confessional pop. The video sees the Murray & Arlo posing for an awkward couples photo whilst duetting on an utterly modern love song full of raw emotion.

Lyrically, 'Sangria' - says Easy Life front-man Murray - "is about emotional dependency, and missing someone bitterly. Even though sometimes the triggers that remind you of someone aren't always healthy, these are often still the most potent and desirable. It's a love song in its rawest form yet contains undertones of something slightly sinister. Arlo is able to express this delicate paradox with me and she is the only person I can imagine sharing this sentiment with so perfectly."

Arlo adds “I was a massive fan of the Easy Life boys - they had this groove and this energy that was really refreshing. We kept just missing each other at festivals and chatting over Instagram then Murray popped a demo over to me - as soon as I heard that hip-hop reminiscent beat with that buttery flow I was obsessed. At first I recorded my verse on this £30 mic I have in my bedroom - I wanted to convey that wistfulness of puppy love and the frustration of never having the person you’re obsessed with around. They’re such lovely boys and I feel blessed to be part of such a sentimental, cute tune.”

This new music and details of the mixtape follows Easy Life’s latest single, 'Nice Guys', which premiered as Annie Mac's Hottest Record in the World recently. This was quickly followed by a surreal satirical video with a cameo from Donald Trump. Both ‘Sangria’ and ‘Nice Guys’ form part of the band's forthcoming 'Junk Food' mixtape, which will be released in Jan 2020. Next year also sees them tour the world in an extensive run of dates including a massive show at London's Roundhouse on March 26th.

The unstoppable Leicester five-piece are quickly making waves to become theessential new band. Theirs is a genre-busting attitude that, like many of their generation, draws no line between a love of US rap or British storytellers in the pursuit of creative freedom (and emotional honesty). On a personal level, Easy Life have also come to represent the power of hard graft and a positive outlook when national optimism seems in particularly short supply. From Murray’s upbringing on a farm in Leicester to lyrics that variously tackle the future of the planet (‘Earth’) male mental health (‘Nightmares’) or the minutiae of everyday life (‘OJPL)’, everything about Easy Life appears effortless, even though the reality has been quite the opposite. Fresh from an ecstatically-received sold-out headline tour, their journey thus far is a timely reminder never to settle for an Easy Life.