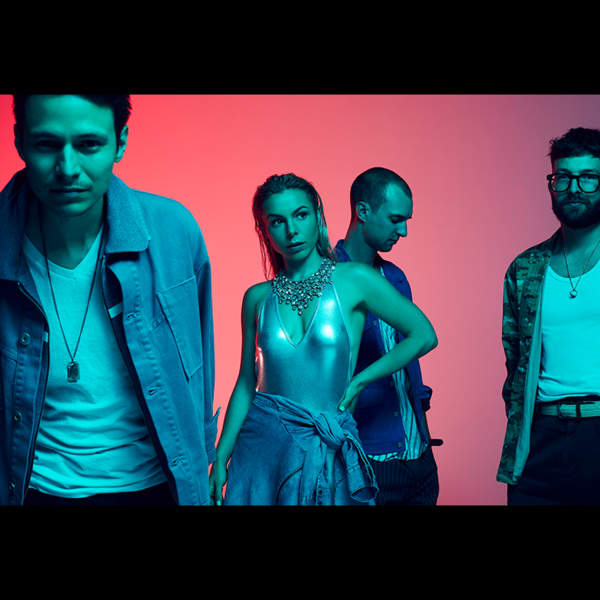 Haelos will live be in-store at Rough Trade EAST to perform tracks from new album 'Any Random Kindness', released 10th May on Infectious.

Who have we become, and why? Is there a way to break from the anxieties and disasters that plague modern life, and are there other possibilities just dangling out of our universe's reach? These are the questions that electronic quartet HÆLOS ask on their second album Any Random Kindness, and with an expanded perspective comes a more widescreen sound than ever before. The shivering, gorgeous atmospheres conjured on their 2016 debut Full Circle are more warm-blooded and varied than ever, the result of a new approach to live instrumentation the band took in-studio. The result? An astoundingly textured record and a huge leap forward for band members Lotti Benardout, Arthur Delaney, Dom Goldsmith, and Daniel Vildósola.

Any Random Kindness springs forth after the extensive touring following Full Circle's release, a schedule of high-profile gigs that included slots at Coachella, Glastonbury, Lollapalooza, Outside Lands, Osheaga and support slots for Interpol and TV on the Radio—"Both bands we admire, so it was great fun to do," Benardout exclaims. Some songs date back to sketches created around the recording of Full Circle, but the majority of HÆLOS' sophomore effort was recorded in a variety of locations—from Benardout's basement and Delaney's house to a studio in the English countryside, miles away from their city digs.

"Changing your environment can really switch things up," Benardout explains. "Being outside London and away from distractions was really important for us. We had a lot of ideas that needed intensity and focus to bring together." With a change in scenery came a change in lineup too: in between Full Circle and Any Random Kindness, HÆLOS expanded from a trio to a quartet, as Vildósola joined after playing with the band during the Full Circle gigs. "I was so happy when they asked if I’d be up for writing the second album with them. They’re like family to me and I believe in the music and the message -- it checked all the boxes.”

And the message has never been stronger than on Any Random Kindness. The album touches on themes ranging from the permanent destruction caused by climate change to the ephemeral emotions projected onto social media—the latter element explicitly referenced by the album's prismatic cover art, which Delaney describes as "This isolated, beautiful thing that's shaped by outside forces it doesn't really understand." "You look at a bonsai tree, it's been manipulated to become this living thing," Benardout explains. "That's what we're all doing on social media—presenting ourselves in these fabricated ways. You don't see the dying leaves or the wires holding it together."

"We were looking deeply at how we lived, and how people live around us," Goldsmith continues. "We noticed the boom of social media and online life, and how that was affecting real life. We've been creating these avatars online that aren't really human. Maybe we've lost our connection with each other." Our connection with the ground beneath our feet has never been more tenuous too, reflected in the track title, “ARK”, "it’s an acronym of Any Random Kindness," Vildósola explains "and also about the climate change crisis we're dealing with—picturing a flood coming and whether an ark would be in the cards. What's gonna save us?" Such weighty themes typically require a fresh approach, and as the band headed into the studio headspace with Goldsmith at the production helm, they drew on their own connection with humanity—specifically, performing in a live setting.

"We started as a production band—we never played live before we signed," he explains. "After going on the road, playing the tracks live really opened our eyes to the possibilities of the second record. It's the product of playing those tunes live." This flesh-and-blood connection came down to striving to make even the most inorganic-seeming of sounds feel positively human. "When I was approaching how to produce the record, it struck me that, although we're making electronic music, we make every sound in the record rooted in reality—from the oscillations to the percussion," he continues. "Everything we make moves particles in the real world, so it's important to make it sound like you're actually in the room with it. We wanted to collide old synthesizers we collected years ago with the modern technology of today."

Overall, HÆLOS aimed to strike a contrast in extremes—"We wanted to make the big moments bigger and the small moments smaller," Benardout puts it succinctly. "The first record touched on a sound that we all identified with, but with this we were a lot more open to bringing in different influences and directions—not being scared to do things that felt alien to us." And Any Random Kindness shares that thematic breadth and sonic scope, from the slow-burning "Boy/Girl" to the clattering, minimal techno-esque thump of "Buried in the Sand."

There's the dark, dystopian vibes of "ARK," which Benardout describes as "coming from a questioning place as far as politics and where we're going to," as well as the more arched and satirical bent of "End of World Party." "It went through a few different versions, and then we took things from other songs and these new melodies materialized that we ran with. There's a lot of fun production in it," Delaney explains regarding the song's unique sonic spin, while Benardout elaborates regarding its themes, "It's a bit more tongue-in-cheek than some of the other tracks on the record. We're all humans in the end—you often need to turn yourself off from the news and enjoy the moment."

The skipping, sighing gait of Any Random Kindness opener "Another Universe" is at once the most cerebral and emotional stunner in the album-length universe HÆLOS have conjured, touching on quantum physics and multiverse theory while striking a parallel with real-life tragedy. "The first lyric —'Come down from heaven now'— came out almost subconsciously” Benardout recalls. A few months later my dad sadly passed away in an accident. It’s eerie for me to listen to now because the song is almost like a prediction, written to help navigate the difficult questions that came with his loss - If you took a different decision, where would you be now? Would things be different?"

"There are infinite versions of ourselves in every scenario," Goldsmith continues, digging deep into the message of hope that lies even under Any Random Kindness' most uncertain moments. "At our lowest point, when something terrible has happened, there's something strange and wonderful about the idea that in another universe, you could be having the best day of your life. There's always the ability to change the direction everything is heading in."