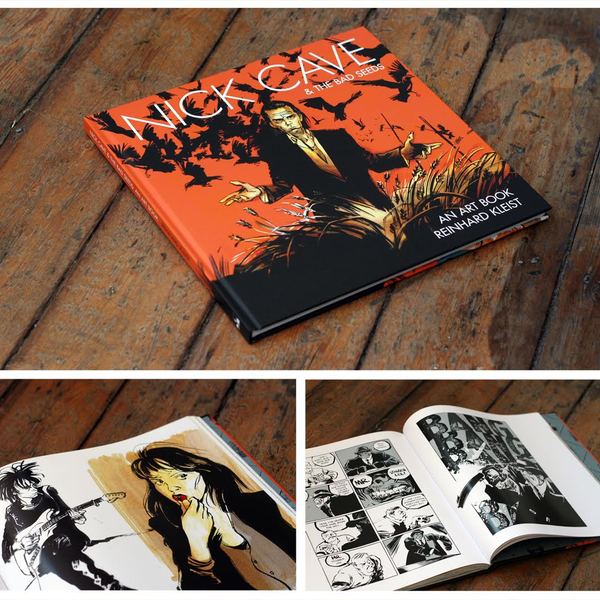 Graphic novelist Reinhard Kleist, author of 'Nick Cave: Mercy on Me' and 'Johnny Cash: I See a Darkness', will draw live to the music of Gris-de-Lin, performing on-stage. This free event in store at Rough Trade East takes place on Saturday 14th April at 1pm.

Order a copy of Nick Cave and The Bad Seeds: An Art Book HERE.

"Reinhard Kleist, master graphic novelist and myth-maker has – yet again – blown apart the conventions of the graphic novel by concocting a terrifying conflation of Cave songs, biographical half-truths and complete fabulations and creating a complex, chilling and completely bizarre journey into Cave World. Closer to the truth than any biography, that’s for sure! But for the record, I never killed Elisa Day.”

— Nick Cave on Reinhard Kleist’s Nick Cave: Mercy on Me

Musician, novelist, score composer and occasional actor: Nick Cave is a Renaissance man. His wide-ranging artistic output has always demonstrated an extraordinary gift for storytelling. In Nick Cave: Mercy on Me, Berlin-based comic book artist Reinhard Kleist employs a cast of characters drawn from Cave’s music and writing to tell the story of a formidable artist and influencer. Kleist paints an expressive and enthralling portrait of Cave’s childhood in Australia; his early years fronting The Birthday Party; the sublime highs of his success with The Bad Seeds; and the struggles he encountered along the way to self-expression.

Capturing everything from Cave’s frenzied performances in Berlin to the tender moments he spent with love and muse Anita Lane, Reinhard Kleist’s graphic biography, like Cave’s songs, is by turns electrifying, sentimental, morbid and comic – but always engrossing.

Reinhard Kleist made his international breakthrough with the award-winning Johnny Cash: I See a Darkness before going on to produce two more graphic biographies: The Boxer and An Olympic Dream. His latest book, Nick Cave & Bad Seeds: An Art Book collects his moody and expressive portraits of the musician and his band, spanning thirty years of writing, recording and live performance.

Reinhard Kleist brings his impressive live drawing show to Rough Trade East, where he will also sign copies of Nick Cave: Mercy on Me, Nick Cave & The Bad Seeds: An Art Book and Johnny Cash: I See a Darkness, which are all published by SelfMadeHero.

Gris-de-Lin is a singer/songwriter and multi-instrumentalist from Dorset. Her music is a heady mix of post-rock, blues and alt-folk peppered with warped electronics. Her debut album, Sprung, comes out on BB*Island in April 2018. The album was recorded in a nursery school and saw her playing virtually all of the instruments herself — from guitars and synths to drums and saxophone. Working with producer/engineer Chris Hamilton (Torres/Kite Base), she also drafted in Rob Ellis (PJ Harvey/Anna Calvi) to play drums on several tracks. Alongside her solo projects, Gris-de-Lin has worked with a number of other artists, including Jim Sclavunos (Nick Cave and the Bad Seeds), Joe Gideon, The Duke Spirit, Tunng and Gemma Ray.