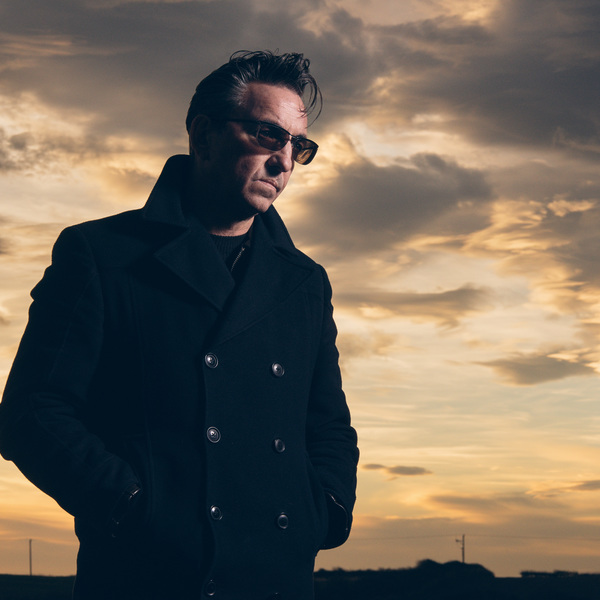 Richard Hawley will live be in-store at Rough Trade EAST to perform tracks from his new album 'Further', released 31st May on BMG.

2019 is set to be a landmark year for songwriter Richard Hawley. Not only is he due to release his ninth studio album, Further, but he will also see a musical based on a collection of his songs open in his hometown of Sheffield. Then, there’s also the small matter of the man celebrating his twentieth anniversary as a solo artist, something that he views with his customary sense of bluff realism.

“I suppose twenty years is quite a long time in this business, but, to be honest, even after all this time, I’m still a searcher. I’m still genuinely searching for things, in music and in life. I can’t tell you exactly what I’m looking for, or where I’m actually going but when I get there, I’ll probably send you a text,” he says, wryly.

In the two decades that have elapsed since Hawley jettisoned band life, first with The Longpigs and then as Pulp’s guitarist, the 52-year-old songwriter has forged one of the most singular and diverse careers in modern music.

As well as releasing a string of solo albums that have managed the rare feat of being both critically acclaimed and commercially successful, Hawley has worked with a host of impressive collaborators – such as Arctic Monkeys, Manic Street Preachers, Elbow and Paul Weller, alongside personal heroes that include U.S guitarist Duane Eddy (his 2011 album, Road Trip, was co-produced by Richard), Shirley Bassey (for whom he wrote the smouldering ballad, After The Rain, in 2009), Nancy Sinatra, Lisa Marie Presley and British folk royalty Martin Carthy and Norma Waterson (he was an integral part of 2013’s Bright Phoebus Revisited tour). There are also bona fide pop stars such as Robbie Williams, All Saints and Texas, all of whom Hawley has played with in differing capacities down the years. Also, his song Tonight The Streets Are Ours was featured in The Simpsons and Exit Through The Gift Shop: A Banksy Film.

His ability to cut across styles, time and, in some instances, place, is down to Hawley’s deep and intuitive understanding of music itself, his grounding stemming back to his childhood when his father, a musician himself, introduced Richard to country, blues and rock’n’roll.

While Hawley credits artists as diverse as Echo And The Bunnymen, The Stooges, David Bowie and The Jam as formative influences, he has also travelled back to the very roots of sound to create his own vision of what music should be.

Talk to him about his blues heroes, and he is likely to list Sonny Boy Williamson, Muddy Waters (“well, my father played with them so…” he smiles), Arthur ‘Big Boy’ Crudup (“the master!”) and Freddie King as personal favourites. At heart, though, Hawley remains in love with rock’n’roll in its purest form and he sports the quiff to prove it. “People often ask me why I still have a quiff. I always tell them it’s because I still can,” he deadpans.

Musical romanticism runs deep in Hawley’s family. Tellingly, he once signed a record deal and promptly gave everyone at his label individual copies of a 45 he’d bought and wrapped especially for them. The single in question was a copy of Jim Reeves’ 1963 hit, Welcome To My World. “That’s the type of record I want to make!” he told the label head at the time. And he proceeded to do just that, releasing his fourth studio album, Cole’s Corner, shortly afterwards in September 2005.

Cole’s Corner proved to be Hawley’s breakthrough album, earning him a nomination for the Mercury Music Prize. While elements of the media wasted words by fixating on Hawley’s so-called ‘retro’ tendencies, the album attracted an entirely new audience who clearly identified with the emotional pull of Hawley’s songwriting. At a time when landfill indie bands scored Number One albums and The Crazy Frog topped the UK singles chart for several weeks that summer, Hawley was busy writing soul-searching songs about real life, about genuinely loss, and about love - all of which he wrapped in warm musical textures and the detailed, smooth production pioneered by the great Chet Atkins.

The albums that have followed Cole’s Corner have seen Hawley continue to develop his craft at his own pace, maintaining a considered sense of momentum. 2009’s Truelove’s Gutter is possibly his most expansive record thus far, while 2012’s Standing At The Sky’s Edge secured him both his second Mercury Music Prize nomination and became his highest charting album to date, hitting Number 3 in the UK.

And so, four years after his last effort, the universally acclaimed Hollow Meadows, Hawley is back with Further – his first for BMG and an album whose very title suggests that he is intent on moving forwards without jettisoning his past.

“I really wanted to challenge myself to try to keep things relatively up-tempo and keep the songs to about three minutes long,” he says openly, “I was asking myself ‘Can you get your message across like a bullet? Can you still do that?’ It’s quite a tough question to ask.”

Hawley’s challenge to himself means that Further is quite possibly his most direct album to date. The songwriting process, however, was as tense as ever.

“I write every day. Is there an actual process? Not really. I walk the dog and things fall into my head. That’s how it goes, honestly. It’s the absence of things that allows me to write. When I’m doing mundane things and my mind is free, that’s when things come to me,” he explains.

“The real challenge though was trying to pick through the material to come up with the songs for this album because I’ve got so many songs that sifting through them was difficult. I could really have been pulled in all sorts of directions, so I had to work out how to get all that stuff into something that could be managed and sounded good.”

The album’s direct tone is set on the thunderous, Rickenbacker thrashing opener Off My Mind. Hawley describes his approach on the track as “playing like tomorrow may never happen.”

Conversely, the depth and consideration applied elsewhere on the album’s 11 tracks is typified by My Little Treasures – a tune that Hawley has taken 12 years to record. The song itself is based on the deep personal experience of encountering two of his father’s oldest friends following the latter’s death in 2007, and the complexities of emotions associated with that time.

“That song’s about true love and loyalty. It’s easy to dismiss those small, almost molecular moments in our lives, but in those moments people show you their heart, and that’s so important,” says Hawley. “There are some very heavy songs on this record. Further, the track itself, is like a little poem. It’s possibly about raising two fingers to the world, but it’s also about trying to be honest. I think it’s also important to say that I just wanted to make a hopeful, positive record this time around.”

Hawley has always drawn on his own experiences to help shape his songwriting, adding literary influences along the way to augment his disarming powers of observation. Like all truly great songwriters, he translates this personal approach into themes that are universal, the ambiguity in his songs allowing for individual interpretation. Indeed, he relates his writing with a further childhood experience.

“My nana and my great aunties would make paper doilies themselves rather than buy them from a shop, and cut them out. As a kid, I would look through them and try and imagine a picture behind them. That’s what songwriting is all about: don’t fill in the whole of the doily because the human brain will fill it in,” he explains.” Whether it be Bob Dylan or Bob Lind, they leave those gaps and you fill them as you listen.”

If the space in Hawley’s music and his lyrical romanticism remain fully intact, Further is also an album that was conceived with the here and now in mind.

“How can it not be?” asks Hawley. “We’re all bombarded by so much hateful shit at the moment that I was determined to make something that is really loving. Some of the songs definitely reflect that and deal with what’s going on. The song Not Lonely is a good example.”

“It’s a bit of a dumb title but it deals with a stage that I hope that our children get to, that stage where they can have a place of their own, a place where they can fry an egg in their pants and listen to whatever music they want,” he continues. “Basically, that song is about the luxury of being on your own, and doing whatever the fuck you want. It reminds me of when I had to get away from home at the age of 17, and finding my own space, and place.”

Over the years much has been made about Hawley’s sense of place and his love of his hometown. Spend the briefest period of time with him in the city and he will regale you with stories of its rich heritage – musical, industrial, personal and otherwise. “Sometimes I do get bored though of people talking about my relationship with Sheffield, but I guess I brought it on myself!” he sighs. “It’s a bit played out, really, although I do also have to say that I do bloody love it here.”

The city’s affection for Hawley is reciprocated, and March will see the opening of Standing At The Sky’s Edge, the musical that bears the name of Hawley’s seventh studio album. It will premier at the Sheffield Crucible Theatre.

The production will feature a number of Hawley’s songs (including three unreleased pieces), continuing his journey beyond pure musical performance and into the world of stage and screen – something which he has begun with his increasing soundtrack work on films such as 2018’s Funny Cow (starring Maxine Peake) and Denmark (starring Rafe Spall and due out later this year).

Written by Chris Bush and directed by Sheffield Theatres Artistic Director Robert Hastie, the musical itself chronicles the life of three families who live on the city’s Park Hill estate across three generations. The narrative moves through the post-War optimism during which the estate was built, its decline into a no-go area in the late ‘80s, and its more recent gentrification. It is a local story that covers global issues. “To me, Park Hill is the symbol of a rainbow that failed,” says Hawley. “It has recovered though, and there’s optimism in that.”

Optimism is also what lies at the heart of Further, an album that once again was made largely in Sheffield with Richard and his crack band aided by co-producers Colin Elliot and Shez Sheridan. As ever, however, Hawley is looking beyond his native city and to a wider world.

In fact, Further is the sound of a man who has very little left to prove but that still has something to say. The album also reflects Hawley’s own enduring approach to life.

“I was 15 when I went to see Quentin Crisp,” he says, recalling a significant night in the early ‘80s when he watched the celebrated raconteur and writer performing his celebrated one-man show in a Sheffield theatre. “He said something that ended up becoming a guiding philosophy to me. It was as simple as this: Wherever you go, there you are. And that is really all you need to know… about everything.”