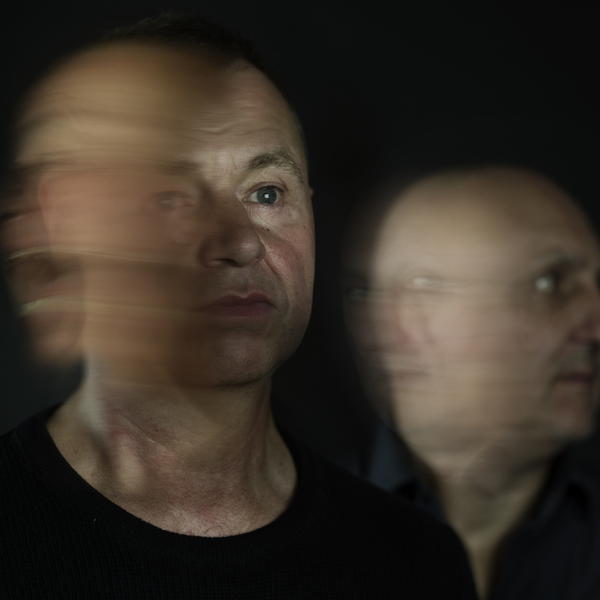 Beginning with a DJ set on entry, there will be an on-stage in-conversation with Test Dept. hosted by Alexei Monroe, followed by an album signing, celebrating the release of new album 'Disturbance', released 1st March on One Little Indian.

Pre-order an Album/ TICKET and we will have your copy of the album and wristband waiting to collect, to guarantee you entry for this seated event.

In an ideal world, Disturbance, the new album from industrial pioneers Test Dept, would not exist. It wouldn’t need to: Britain would not stand divided by xenophobia; working class communities would not be under siege; Capitalism would not have created a climate change crisis pushing the planet towards a dangerous brink; and the Thatcherite ideals that Graham Cunnington and Paul Jamrozy spent Test Dept’s early years raging against would not be so terrifyingly back in political vogue. “The mess we’re in now is unbelievable, hence the title. It’s disturbing in the extreme” says Cunnington, who’s been issuing angry, enveloping sound collage calls-to-arms about all this since 1981. That was the year he, Jamrozy and a revolving door of talented artists from disparate disciplines and backgrounds formed Test Dept, forging an incendiary new sound from a squat in New Cross that made them underground heroes and landed the group under surveillance by the British government. 37 years later, on Disturbance, that sound is as incendiary as ever.

“It began with a project to do with our archive” recalls Cunnington. It was the early 2010s and Test Dept had been dormant for years. The pair wanted to sort through Test Dept’s old recordings to “re-establish our history and get our music out there again” after record label red tape left many of their 14 albums out of print. As the group combed through their back catalogue they also put into action an ambitious film installation, DS30 – through a commission by the AV Festival in Newcastle – marking the 30th anniversary of the UK miners' strike; and a book, Total State Machine published by PC-Press laying out their history of innovation. Live dates at various festivals in the UK and around Europe were scheduled, leaving Cunnington and Jamrozy wondering what to play and how to play it. “We knew we wouldn’t want to do a greatest hits” says Jamrozy. So instead their process of remixing songs from their past became a process of remaking them for the stage. When attention turned to the “next logical step of a new album”, an idea emerged – taking germs of ideas from old songs and turning them into new, sledgehammer-heavy sonic experiments full of powerful protest poetry. Politics had come full circle. It felt fitting to do the same with their music.

The result is an album that at once peers into the past and roars into the future, across eight tracks that conjure the raw power of Test Dept in their original 1980s incarnation, while adding new elements. “We’re different people now – not spring chickens anymore” laughs Jamrozy. “We’re still angry but it’s tempered by a slightly different wisdom. We tried to upgrade the sound, to soup things up further – looking back on old recordings we felt we sometimes lacked bass, so that came to the fore a lot more here”. Bass isn’t all. Speak Truth To Power surrounds its lyrics about the savagery of capitalism with grand symphonic strings, foghorn-like keyboard blasts and clattering metallic percussive noises. Full Spectrum Dominance, about “the perpetual war we seem to be in, from Iraq to Afghanistan to Syria”, pits combat-themed sound design and nightmarish lyrics against intense pulses and metronomic drums – from new collaborator, drummer Zel Kaute – full of what Jamrozy describes as “chaotic freedom”. Landlord meanwhile takes thumping kick drums that evoke the group’s ‘90s techno experiments and deploys them into a battle zone of machine gun snare rolls, coruscating arpeggios and violent cries about Britain’s Grenfell-era housing failures. “We try not to be too literal but some things need to be said” Jamrozy explains of its blunt-force calls for people to place “a fist in the face of rapacious greed”.

“Paul and I live not far apart, so we’d come together to work on Disturbance as well as working in our own spaces” says Cunnington of the making of the record. As work on the album progressed, so did development of a studio owned by another new collaborator, co-producer and live sound engineer Lottie Poulet, where the group fine-tuned the new album’s agitative rhythms and rhymes, recording overdubs and mixing the release. The message that the pair hope is clear, by the end of the album’s narrative arc, is one of hope: “trying to see something optimistic in the potential of building networks and in positive protest, instead of just rioting and looting. We wanted to show the possibility for change and escaping this scenario” says Cunnington.

“Art is not a mirror to reflect reality, but a hammer to shape it”, the poet and playwright Bertolt Brecht once wrote. It’s a mantra that continues to drive Test Dept, who opened Total State Machine with that quote and who approach music as a vessel to inform, to persuade, to excite and to ignite. On Disturbance, that philosophy hasn’t changed from their days collaborating with a striking miners’ choir in South Wales to attract attention to the miners’ plight; from their days showing sonic solidarity to rave artists threatened by the Criminal Justice and Public Order Act 1994; from their stands against pit closures, apartheid, Rupert Murdoch and more. Complete with chilling artwork, courtesy of the group’s new visual director David Altweger, full of powerful images and revolutionary themes consistent with the Russian-inspired aesthetic of their early work, Disturbance attempts to take a hammer to the horror of recent times. “Destroy the past, destroy the past” a voice whispers over beautiful, drifting piano notes on the delicate Debris. Test Dept return to their past on this eviscerating new album in order to move into a bold new future. They hope Disturbance can soundtrack a society doing the same.