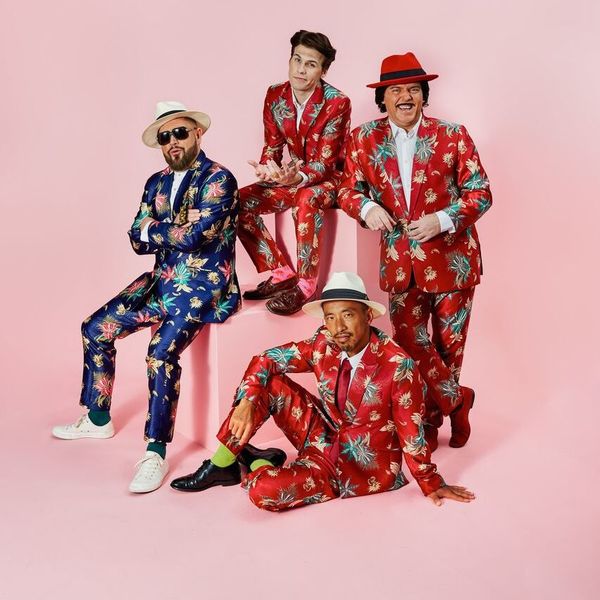 The Cuban Brothers will be performing live in-store at Rough Trade East on this Bank Holiday afternoon, celebrating the release of 'La Familia', out 24th August on Sunday Best.

Pre-order The Cuban Brother's 'La Familia' Album on CD or LP HERE, or purchase on the day of this in-store and get it signed by the band.

When Mike Keat created Miguel Mantovani, the shameless, moustachioed impresario at the core of the Cuban Brothers, he had no idea that the character would become his career. Two decades on, Miguel and his suspect sidekicks are renowned the world over for their party-starting skills, risqué sketches, B-boy moves and funk-fuelled music.

From sold-out tours, festival spots and support slots for rock royalty to crazy cabaret club nights, film roles and fashion shows, The Cuban Brothers’ unparalleled act is now ingrained in pop culture. Everywhere from the Far East to South America, from Brisbane to Bahrain, from the Gumball rally to the F1 circuit has fallen for the Hawaiian shirts-sporting crew and their outrageous, X-rated antics.

Never more in demand, The Cuban Brothers’ 20th anniversary year began with tours of Australia and New Zealand and a long-planned jaunt though the Scottish Highlands & Islands in a yellow Cadillac, part homage to the great Billy Connolly, part romantic return to the country where the Cubans began.

As ever, their summer is packed with festival appearances in Britain and abroad. Compilation album La Familia is released next month, featuring one new Cubans track – I Hate Hate – alongside classics by Herbie Hancock, Children Of Zeus and D’Angelo. The Cuban Brothers may be a comedy act, but they’re simultaneously serious musicians who have played with Prince, been on the road with James Brown and supported Fatboy Slim, Chuck Berry and De La Soul.

This year you’ll see them with a 12 piece band, half of whom previously played with Amy Winehouse, and a rotating roll-call of special guests on board to help them turn 20, including The Average White Band’s Hamish Stuart and the Jungle Brothers’ Baby Bam.

So what’s changed in two decades?

“Honestly, not a lot,” says Mike. “We were an anomaly when we started and we still are. There are always new characters and new songs, but the core of the show has remained the same. It’s difficult to describe – it’s a marriage of music, comedy and dance in which the joke is always on us and the audience are part of the performance. Basically, it’s several spurious shared talents rolled in to one for fun.”

These days, you’ll see much less of Mike’s private parts than in the aptly-named Noughties – blame fatherhood and social media rather than sagging – and the back flips are largely left to the band’s newest member and MC. Five years ago, the trio became a quartet when Miguel, Archie ‘Archerio’ Easton and Kengo Oshima, aka Kengo San, were joined by then teenager Domenico, aka Juan Erection.

“Dom joined us for a video aged 17,” says Mike. “A fortnight later, having never been abroad before, he was with us in Singapore and Bali. We all still dance, I still head spin, but a cork up in to a flip? Not at my age, thanks.”

A career in entertainment was always on the cards for Mike, who moved from Edinburgh to New Zealand as a child and by his teens was DJ’ing and running clubs throughout Indonesia. At 18, he returned to Scotland, but not before a summer spent living in Palma provided the inspiration for his comic creation.

“Miguel was based on a hotel entertainer, a wee Spanish guy with big ‘tache who ran kids’ discos at night,” says Mike. “He was fantastically substandard. He’d introduce a song then take 20 seconds to run behind console to press play. It was lunacy.

Miguel sprung to life during a strange, late ‘90s summer during which Mike split his time between dj’ing at underground clubs in Edinburgh and performing at Pontins in Blackpool, a job his granddad had put him up for.

“You couldn’t imagine two more diametrically opposite scenes, but what Pontins gave me was a chance to go to work as someone different every day and I loved that,” says Mike. “Miguel began as more of a Latin lounge act. I’d wear safari suits, a fake ‘tache and silly syrups and sing stuff like Do You Know The Way to San Hose?

“I ended up being Ken Dodd’s compere/butler after he had to sack the Diddy Men. I worked with Keith Harris and Orville on their adult show and with some amazing old-school comedians like Frank Carson and Mike Miller. When I went back to Edinburgh, I wanted to keep up the comedy, but still be a serious DJ. The Cuban Brothers was my way of fusing the two.”

Mike brought in Archie, a welder turned Prodigy dancer and fellow B-boy, to play Miguel’s troubled nephew and, soon after, DJ and dancer Kengo as his Japanese love-child. Their act of skits and stories between soul, funk and hip hop songs, with Mike freestyling and the trio breakdancing took off at a student night which always sold out. At the Edinburgh Festival, a late-night residency at the Gilded Balloon became a love-in for upcoming comedians, among them Sasha Baron Cohen as Ali G, Dara O Briain, Andrew Maxwell and Ed Byrne.

Within months of becoming The Cuban Brothers, they were offered a residency in Amsterdam and another at the legendary Manumission in Ibiza. In south London, Rob Da Bank made them a staple of his Sunday Best parties and word quickly spread.

“It was a meteoric rise,” says Mike. “Suddenly we were in demand all over the place. I was doing sketch shows for MTV, taking the piss of DJs. House music had gone up its own arse and we wanted to bring back the fun of the rave days. We were the anti-chin stroke band. We still are.”

Festivals came calling, first in Britain then abroad. In the States, the Cuban Brothers became regular hosts of the Gumball Rally and starred in Gumball 3000: The Movie. Madonna, Brad Pitt and George Michael were among the superstars at their shows. Dozens of tours have since taken the Cubans as far afield as Rio, Cambodia and, of course, Cuba.

The band’s private party work exploded early on and hasn’t stopped since – everyone from Elton John, Robbie Williams and Richard Branson to Davina McColl, Damien Hirst and Ron Dennis have called on the Cubans to sprinkle their magic. Russian oligarchs have hired them to entertain their wives. The late Supreme Leader Kim Jong-il flew them to North Korea to perform for his cabinet and kept them captive for days. Last year, they hosted Noel Gallagher’s 50th birthday party after the singer declared them the best act at Glastonbury.

In truth, Mike could fill a book with crazy Cuban Brothers tales, but he doesn’t have the time. Between writing new material and touring, he has moved in to acting. Fan Plan B personally recruited Mike to play the despicable Scummy Man in Ill Manors. The following year, he had a star turn as a barman in Dexter Fletcher’s Sunshine On Leith, the runaway hit based on Proclaimers songs. The band had cameos in the 2014 rom com Cuban Fury and Mike most recently worked with Ricky Gervais on a film based on The Office’s David Brent.

A Cuban Brothers documentary is in the pipeline, featuring footage from their recent trek through the Highlands & Islands. After 20 barely believable years, much to Mike’s surprise, Miguel and his sidekicks remain unrivalled party starters still finding new fans all over the globe.

“I’ve never had a long term plan,” Mike admits. “For as long as we’re enjoying ourselves as much as our audiences, the Cubans will keep going.”

As for the head-spins in his underpants, you’ll have to wait and see.