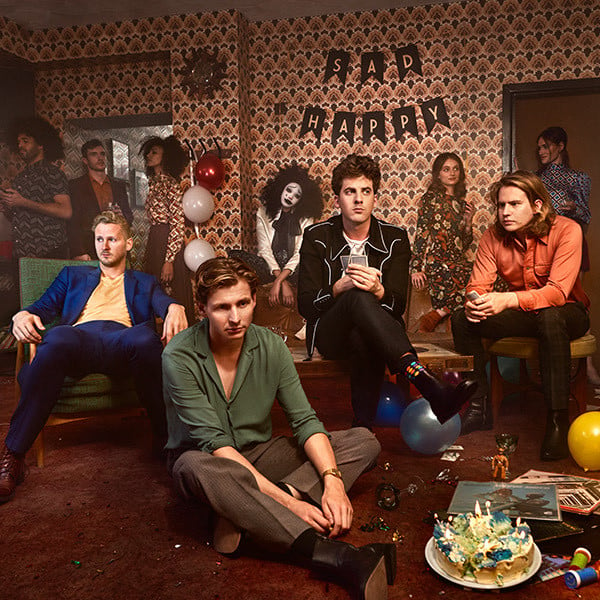 THIS LATE EVENING (9.30pm) CIRCA WAVES SHOW AT METRONOME IS COMPLETELY SOLD-OUT!

Please note: All stage times are subject to change.

Pre-order a Ticket or an album + Ticket to gain entry to this show.

- All Albums and Tickets will be available to collect from Rough Trade Nottingham on album release day (13th March) from 10am until 5pm, and then from the venue, when doors open at 8.30pm.

- We highly recommend that you collect your Tickets and Albums from Rough Trade Nottingham (between 10am and 5pm on the day) prior to arriving at the venue, for a much quicker and smoother entry.

- Doors open at Metronome at 8.30pm, and the on-stage time is approximately 9.30pm (subject to change). But we highly recommend and advise that fans get down early for 8.30pm, for swift entry to the venue and to avoid any disappointment.

An album of our times, Sad Happy, CircaWaves’ 4th studio LP, is formed of two diametrically distinctive sides, which unite as one complete body of work, to be released ‪on 13th March 2020‬.The first single ‘Jacqueline’ is an infectious, Soweto flavoured groove, and is another bold slice of bright, life-affirming pop from the pen of Kieran Shudall, who is establishing himself as one of Britain’s most prolific young songwriters. With its infectious chorus and refrain of ‘Good times are coming around the bend’, Jacqueline is at once instantly recognisable and also another bold sonic leap forward forCircaWaves. It’s a song that’ll sit effortlessly amongst a setlist already brimming with anthems.

Discussing the themes behind ‘Sad Happy’, Kieran says:"We live in a world split into two extreme halves. One moment you’re filled with the existential crisis of climate doom and the next you’re distracted by another piece of inconsequential content that has you laughing aloud. I find this close proximity of immense sadness and happiness so jarring, bizarre and fascinating. Our brains rattle back and forth through emotions at such a rate that happiness and sadness no longer feel mutually exclusive. This idea was the blueprint for Sad Happy and is the theme that underpins the album.

1085872Sad Happy was written in my Liverpool home, it’s also hugely inspired by my surroundings and the love I have for the city. It runs through thoughts on mortality, love and observations of people.”Sad Happy was written and produced in full by Kieran Shudall, and mixed by Grammy winners Dan Grech-Marguerat and Matt Wiggins. The album is the follow up to last April’s Top Ten Charting UK Album What’s It Like Over There?. In a day and age when the barriers to releasing music have been well and truly torn down, the prolific nature of Kierans’ writing, coupled with Circa Waves relentless appetite for playing live and their own label imprint, are cementing the Liverpool four piece’s reputation as one of the UK’s most dynamic and exciting bands.