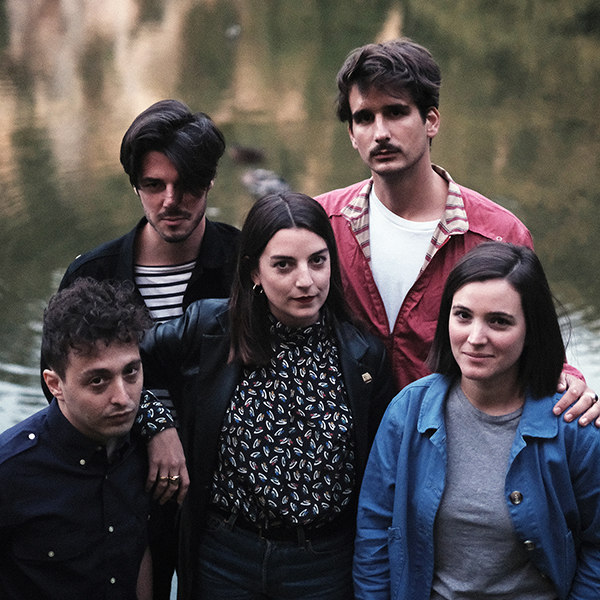 With the release of Juillet, Parisian quintet En Attendant Ana make good on the promise of their album Lost & Found (2018, Trouble In Mind), diligently crafting a set of ten songs that shimmer, glide and sway with a sophistication only hinted at by their debut. Trouble In Mind is honored to present Juillet exclusively to the world.

Recorded by Vincent Hivert and Alexis Fugain over the course of one week at Studio Claudio, an isolated studio in rural France, Juillet is the sound of a band reshaping itself, adapting to numerous transitions both within the band ('Juillet' is the first recording with current guitarist Maxence Tomasso) and in life.

Primary lyricist & front person Margaux Bouchaudon says "I tend to consider it as a journey towards acceptation of losses (would they be friends, lovers or dreams through death, departure or disillusion...) but also towards self respect and independence." Indeed many of the songs on Juillet feel hopeful, despite their melancholic tone, lacing a lilting melody or triumphant trumpet swell (courtesy of multi-instrumentalist Camille Fréchou) or charging guitar riffs from Tomasso or Bouchaudon. Famed French engineer Dominique Blanc-Francard mastered the whole affair with a deft hand, coaxing the subtleties of the mix without sacrificing its sonic wallop.

Whereas the tunes on Lost and Found felt wild & reckless, the songs on Juillet feel focused, composed by the band over six months, working as much as possible on arrangements, structure to create a set of songs that feel bonded together by the magnetic pull of each other; each shines on their own, but viewed as a whole, they dazzle. Songs like "Do You Understand?" and the first single "Words" point toward a new frontier for the group, effortlessly sharpening their razor-sharp hooks to such a fine point, you almost don't realize their complexity.

Elsewhere, songs like "Flesh or Blood" and opener "Down The Hill" revel in the push/pull dynamics they teased at on "Lost and Found" while earworm tunes like "In / Out"s poetic lyrics bounce atop a toe-tapping pulse (courtesy of rhythm section of bassist Antoine Vaugelade & drummer Adrien Pollin). Finally, songs like "From My Bruise To An Island" and the sparse "When It Burns" bridge a confessional narrative atop an amorphous ambient float. They feel important, and hint at an exciting future for a band letting go of its past and entrusting fate with its future. Juillet is the French word for July - a month representing the transition from spring to summer, & in the band's own words Juillet is "a symbol of the end of something and the beginning of another one…"