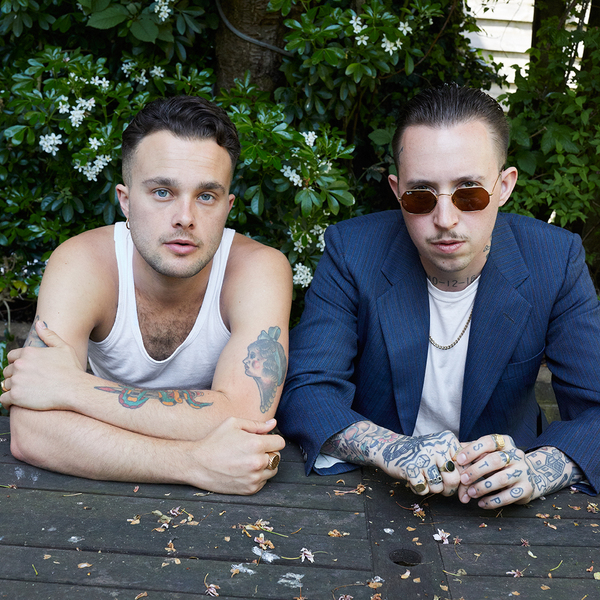 Slaves will be live in-store at Rough Trade Nottingham to perform tracks from their new album 'Acts Of Fear And Love', released 17th August on Virgin.

*This is the first in-store performance (6.30pm) of two on the same day.

Rock'n'roll is the wild wild west. Isaac Holman is well aware of this. On an unassuming week day, he finds himself in the middle of the Nevada desert by a ranch, surrounded by rock formations and dirt tracks. A sign reads 'NO HIKING'. As his bandmate Laurie Vincent marches beyond the sign with an acoustic guitar in hand (“I haggled this down from $60 to $50 in a Vegas pawn shop”, he boasts), Isaac gets nervous. He's terrified of snakes. “I don't know why anyone would keep a snake as a pet,” he says. Recently Isaac's been thinking of getting a duck as a pet. “Or a bat, but you can't keep bats as pets.” I don't think you can keep ducks as pets either. But rules haven't stopped either of these men in the past. Slaves has been built on a rejection of rules and it's served them well since the release of their Mercury nominated debut album 'Are You Satisfied?' in 2015.

But rules are a funny thing. Even in disregarding them, you can find yourself creating your own rule system as a means to survive. When it came to their follow-up album 'Take Control' (2016), they were conscious of reacting quickly to their burgeoning success. They'd developed such notoriety that Beastie Boy Mike D produced it with them and if it had a rulebook Number 1 on the list was to do more of the same. Today they describe that record as a “mixtape”, a hodge-podge of everything they had at the time that felt “Slaves-y”. Their impression of what it was to be Slaves was much narrower than it is now. For album three, Slaves are no longer content railing against the status quo, they want to smash their own self-created system.

Titled 'Acts Of Fears And Love', this record is not what you've come to expect from the duo and yet it also feels like an amalgamation of everywhere they've been to date. They blast some of the songs out of their rented white Jeep, while cruising along the desert highway. Sure, there are moments of punk – fast, shout-y, containing all the energy of a shaken can of lager ready to erupt. But for once their songs are not dictated by rhythmic guitar licks and drum thwacks. They're dictated by melody. “We were thinking about the craft of songwriting for the first time,” says Laurie.

The album title may sound a little hifalutin and by Laurie's own admission took some getting used to. As with everything Slaves, however, it's really a philosophical, bold and direct statement that's spawned from everyday chatter. In this instance it was a memory of Isaac's from a college teacher who once told him: “There's no such thing as hate – just acts of fear and love.” The thought poured out of Isaac's mouth when he was talking to Laurie one day. “And I was like, 'That's it!' That's the lyric,” recalls Laurie. “And Isaac goes, 'Really?'” This is the alchemy of Slaves. Neither Laurie nor Isaac seem able to move forward without the other, they're one another's biggest cheerleaders. When asked what it is about their chemistry that continues to reap dividends, they stumble. Laurie thinks. “It's like… My fingers and your arms,” he says to Isaac. “You smashing those skins and me playing those strings.” They crack up.

Joking aside, the title is a conversation starter. At the moment, the word 'hate' is bandied around so often it can be counteractive and toxic. “Even if you're from the same background with the same views people are attacking each other,” agrees Laurie. “We live in a real intense society. This album and that song feels like you're having a massive chat with yourself. It's like self-help.” This hippie bent in their ethos has made them less restrictive when it comes to exposing their own vulnerabilities. Take the track 'Chokehold' for instance. The sound is agitated Britpop through the lens of shinier modern production, but the lyrics muse on rejection.

“That's our attempt at writing a pop love tune,” says Laurie. At first Isaac was concerned he was wearing his heart on his sleeve a bit. “A lot of men have had that feeling of being dumped and not spoken about it,” he says. When it's suggested that it's a novel truth to be writing about from a male perspective, Laurie becomes ponderous. “When I listen to music I don't think about it being sung by a man or woman. When I'm singing 'Torn' by Natalie Imbruglia to myself in the car, I feel like I'm a little torn, you know what I mean?” They laugh. “It's liberating as a human to fucking say those things out loud. While everyone's focused on hating each other, now feels like a good time to divert their attention to love.”

The record is far more genre-bending than before, containing the speed-y vitriol that's always been par for the Slaves course, but tempered by quieter, dreamier moments of straight-up '90s indie. The tracklisting is intended to keep throwing you off guard, so that you don't know what's coming around the bend. “Very early on Laurie said: We're gonna write a fucking heavy album,” recalls Isaac. But then he changed his mind, instead thinking: why don't we try to write the biggest record we can? Inspired by the Oasis documentary 'Supersonic' and seeing Noel Gallagher play live, he imagined a crowd of Slaves fans who were united in singing a chorus, not just careening into each other's sweaty bodies. Laurie wanted to have proper singalong anthems. So out went the formulaic rules they had for writing heavy tunes and in came relentless self-analysis and education. “I wanted to challenge us, see how far our songwriting could go,” he says.

Over the course of two fortnights out in Brussels with Jolyon Thomas (who they recorded the debut with, and who'd since gone on to produce U2 and Royal Blood), they pushed themselves and each other to the brink. In the past, they were eager to smash a song out and move on. This time they ached over every teeny element, taking the longest time they've ever had. “I wanna play rock songs, I wanna play power chords, I wanna sing more,” says Laurie. “We've always been dubbed a 'good live band', and I want to prove that we've got the tunes to back it up.”

The song ideas were written relatively fast. Before going to Belgium, they penned four of them in as many days in Brixton, including 'Photo Opportunity' (a riff-driven number about struggling with being recognised in the street), 'Bugs' (a hard metal track about the youth) and 'Daddy'. Once they got to Belgium, they came even faster. The single 'Cut And Run', which was built around a dance beat, flew out, inspired by a Conservative canvasser who came knocking on Isaac's door once. “I've been overthinking my lyrics to the point where I was pissing Laurie and Jolyon off,” says Isaac. He's been overthinking because he's more exposed. 'The Lives They Wish They Had' – a reaction to social media obsession influenced by the sound of The Fall and Gang Of Four – is as critical of others as it is of themselves. “I take pictures of my food all the time,” says Laurie. “Since we've written that song I don't think I've posted about anything I've bought. What the fuck was I doing?”

'Daddy' is a gorgeous, simple number about a man having a midlife crisis, featuring the backing vocals of Ellie Rowsell from Wolf Alice. It's positively soft and one of the first instances of spaciousness in their sound. “This is the first real time that Isaac sings,” says Laurie. “It's something I've always wanted to hear him do.” You could say there's less frustration in the music. “We're not angry any more,” says Isaac. “Generally we're both quite content.” Indeed since the last record, Laurie and Isaac have spent time growing apart, which has only made their bond stronger whenever they've reunited. In December 2016, Laurie welcomed his first child Bart into the world. That's Bart on the album cover (shot by luminary photographer Juergen Teller). It's the first time Slaves have been in their own artwork too.

“It was time,” says Laurie. He wasn't nervous about including Bart in the shot. “If a kid didn't wanna be in a photo you'd sense it. There's something about Bart. He gave us permission,” he says. The shot features Isaac in the bath and Laurie on the “shitter”. It feels personal. “Being honest is the only thing we've ever been able to do,” says Laurie. “It's about our relationship.” Their relationship has matured, too. When the lads found themselves opening for Kasabian last year on a nationwide arena tour it humbled them. They became tighter once more because it was Slaves against the world. They consider themselves better humans as a result. “I feel like you've chilled out loads since Bart in a good way,” says Isaac to Laurie. Laurie's not convinced. “You're definitely still well intense,” says Isaac, with a hint of reassurance.

This is a record that Isaac and Laurie are “100% proud of”. “This record is confident,” says Laurie. “We were confident about the process. We made all these decisions for ourselves. We wanted to prove that we could do stuff on our own.” This confidence is easy to hear on the album. It’s a short sharp blast of intent, not pandering to expectations but a clear-eyed portrayal of how the band see the world in 2018. 'Acts Of Fear And Love' is warts-and-all, uncompromising, honest and possibly the best thing Slaves have done so far. They have a right to be proud.