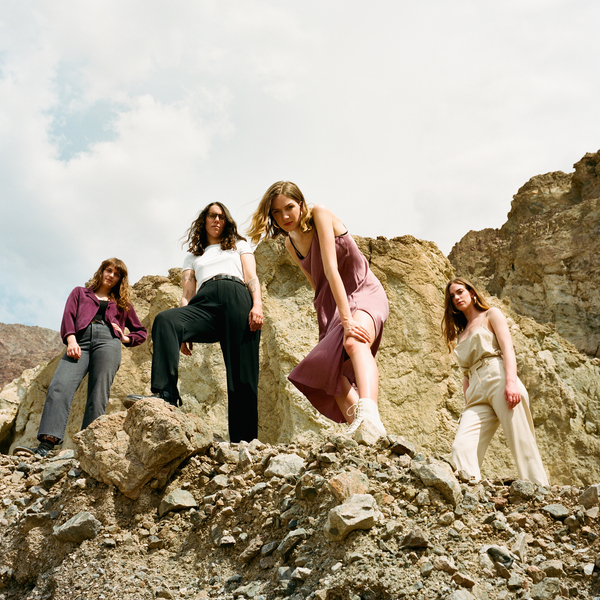 The Big Moon will be live in-store at Rough Trade NOTTINGHAM to perform tracks from their new album 'Walking Like We Do', released 10th January on Fiction.

Playing your first proper live show in a year at the world’s most prestigious festival is, by anyone’s standards, a bit of a gamble. For The Big Moon, the decision to return to the stage and debut material from their second album, Walking Like We Do, during a secret set at Glastonbury 2019 proved to be the latest in a long line of risks that have paid off.

Ever since lead singer Juliette Jackson laid the foundations for the project, back in 2014, the London-based band have consistently gone with their gut, following what feels right rather than what’s easiest. At a time where guitar-based indie had fallen out of favour, they were credited with breathing new life into the genre, and were subsequently awarded a Mercury Music Prize nomination for their 2017 debut, Love in the 4th Dimension. Impressive enough, even before you consider that - at the time of recording - the quartet were simultaneously performing backing band duties on Marika Hackman’s album, I’m Not Your Man.

A shared US tour followed that summer, during which they opened for and played back-up with Hackman every single night. Sat in an East London pub today, bassist Celia Archer still sounds awed recalling the reception they received, especially in the more remote areas of the country. “When you go to Milwaukee and there's someone wearing your t-shirt, singing your songs…” she trails off, amazed.

Even recalling the moment their punishing schedule finally caught up with them, when drummer Fern Ford collapsed during soundcheck in Toronto, they make the experience sound character-building rather than catastrophic. ”My body gave up,” Ford grins. “I was just weeping, and my bones felt about 50 times the weight…” The fact they recall the manifold, minor touring dramas they’ve weathered together while shrieking with laughter, is testament to their friendship, which today is stronger than ever.

That close bond stood them in good stead during the creation of their much-anticipated second album. As per its predecessor, Walking Like We Do was written entirely by Jackson. But where with Love in the 4th Dimension The Big Moon simply set songs they’d been performing live for the best part of two years to tape, this time every single aspect of each new song was undefined and up for debate.

When lead guitarist Soph Nathan cites the number of choices they had to make as one of the most challenging aspects of making the album, Archer chimes in to agree. “With these songs, it was like: we can take them in any direction. Any of them have the potential to be big singles."

Jackson takes over, “For a while I think I was writing songs that were more like [those on] the first album because I felt like that's what we should do. But after six months I knew I wanted it to be sonically bigger, deeper, wider and more spacious than a rock album. We wanted to let the songs breathe a bit more. And while we still wanted it to have energy and all the right feelings, we just wanted to be more creative with how you conjure a mood.”

Citing Vampire Weekend, Solange, James Blake and Frank Ocean as reference points, the band approached producer Ben Allen, whose diverse work with Animal Collective, Gnarls Barkley and Bombay Bicycle Club made him the perfect fit for the project. After an introductory Skype chat, the band travelled to his studio in Atlanta, Georgia.

Recorded early 2019, in three and a half weeks - compared to the 12 days their debut took - Walking Like We Do represents a giant leap forward for The Big Moon. “Before we were more of a plug-in and play kind of a band, but these songs need a bit more,” Jackson explains. Frequently piano and keyboard-led rather than being reliant on grungey guitars, and rich in tight-knit vocal harmonies and rolling grooves, it’s a cinematic but innately hook-laden set that truly expands the band’s range.

This renewed ambition is reflected in Jackson’s choice of subject matter too, which largely finds her swapping straightforward love songs for more thorny subjects. Driven by sombre piano trills, ‘Dog Eat Dog’ meditates on societal injustice, and was inspired by the Grenfell tragedy. ‘Barcelona’ examines the inevitable state of flux caused by growing older, while ‘It’s Easy Then’ discusses the sense of impending doom that goes hand in hand with being a citizen of the world in 2019. Extending that theme further, lead single ‘Your Light’ is about finding solace in relationships during chaotic times, finding Jackson as wry as ever in couplets like, “Maybe it’s an end cause this don’t feel like a start / But every generation probably thought they were the last.”

“I don't want to use the word empowerment,” Archer grimaces, “But there are definitely songs that offer some sort of hope. There's a lyric in ‘A Hundred Ways To Land’: "We don't know where we're going / But we're walking like we do." That sums up a lot of what Juliette was saying, in that there's a lot going on, and we're all figuring it out, but it’s better to move confidently forward in the face of all of this shit than just do nothing.”

“It all feels relentless,” Jackson agrees. “I mean, everyone is trying to process it. We made these songs to provide listeners with some release. And for us too. It took us a while to realise we could do anything on this album, and feel confident with our own voices. But I realised that there is strength in our character, in our lyrics, and in the decisions we make.”

More self-assured and creatively fearless than ever before, The Big Moon are ready for the next chapter.