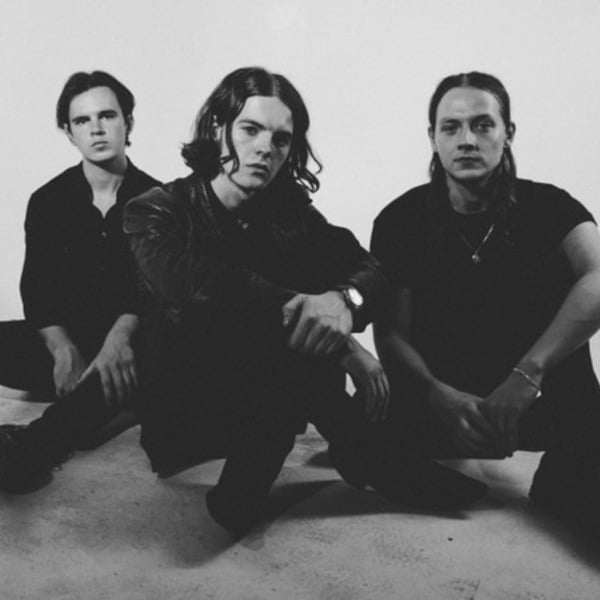 The Blinders will be live in-store at Rough Trade Nottingham to perform tracks from their new album 'Columbia', released 21st September on Modern Sky Entertainment.

“Polluted and poisoned, a dying race/Oh God, he doesn’t want to see the end of days”

The Blinders, ‘Rat In A Cage’

Escape these end times. Free yourself from mind control. Prepare to celebrate the new world order. ‘Columbia’, the debut album by The Blinders, is ready. Nominally, it’s the work of three young men living in Manchester by way of Doncaster. Spiritually, ‘Columbia’ is the beacon to show a better, freer life. Past cult leaders have promised spiritual awakening, true. But the way of The Blinders is more benign and relies only on possessing open ears to gain enlightenment.

You may well have already heard them on Radio 1, Radio X or 6 Music, who playlisted recent single ‘L’Etat C’est Moi.’ You may have seen The Blinders supporting Idles, The Charlatans or Cabbage, or at festivals including Reading And Leeds, Isle Of Wight, Kendall Calling, TRNSMT, Festival No 6 and Neighbourhood Weekender, where they drew a huge crowd to their headline slot at the new bands stage. They’re impossible to miss live, where singer/guitarist Thomas Haywood dons warpaint to assume the fearless persona of Johnny Dream, whose tribal gaze adorns the sleeve of ‘Columbia.’ “Once the warpaint is on, we become monsters, thunder riders,” says Haywood of his alter-ego. “As Johnny Dream, I can totally lose myself in the music and become a shamanic Jim Morrison character. We can do anything, be anyone.”

That shamanic, compelling mood is captured perfectly in ‘Columbia’. Ably produced by Gavin Monaghan (Editors, The Sherlocks, Goldblade), the album sees childhood friends Haywood, bassist/co-writer Charlie McGough and drummer Matt Neale follow Johnny Dream on his spiritual awakening, from the coruscating swagger of the opening ‘Gotta Get Through’ to the raw, beautiful and ultimately redemptive finale ‘Orbit (Salmon Of Alaska)’. Inspired as much by literary touchstones such as George Orwell and Jack Kerouac as much as Nick Cave, Kanye West and The Wytches, ‘Columbia’ is often as dark as you’d expect from an album named after the utopia Charles Manson promised his Family. But, as Haywood notes: “We didn’t want the album to be totally negative. We’re holding a mirror up to society, and there is good in society, so it was absolutely important to end on the optimism of Rat In A Cage and Orbit.”

The latter song was recorded after a schoolfriend of the trio committed suicide. “We’d been struggling to get the song right and were on the verge of abandoning it,” Haywood recalls. “But we read over the lyrics after what happened to our friend and realised we had to get it down. The vocals are one-take.”

Having grown up in Doncaster, The Blinders moved to Manchester to go to University Of Manchester after their A-Levels, though Haywood and Neale soon dropped out to leave McGough to complete his degree in politics and history this spring. “We’d been in bands before, but we’d only just started The Blinders when we finished sixth form,” the bassist recalls. “We felt there was something there, and Manchester was the perfect next step to live a more creative lifestyle. I don’t think it matters where we’re from, ultimately. We say we’re from Doncaster and we love the place, but the community spirit among bands in Manchester who’ve helped us out has been a godsend to us.”

McGough speaks fondly of university giving him both structure when The Blinders aren’t on tour, and of bringing fresh ideas to bring to his songwriting – he studied the Spanish Civil War as part of his degree, with Orwell’s writing a recurring influence on Columbia, not least the eerie campfire feel of ‘Ballad Of Winston Smith’. (“A song you could sing after the apocalypse,” notes Haywood.)

The album contains a reworked version of 2016 debut single ‘I Can’t Breathe Blues’, but daringly leaves off ‘Swine’, the appropriately infectious single which had critics raving. Early Blinders songs were inspired by specific outrages, with ‘I Can’t Breathe Blues’ written after the chilling recording of police brutality victim Eric Garner in New York was made public. The trio’s writing has since become broader in scope, without losing that feeling of rage. “We didn’t know when we started that there’d be such a theme to our songs,” admits McGough. “It was fascinating seeing that narrative come together once we’d recorded the album, realising that even early on in our songs we were expressing that yearning and that hope.”

McGough and Haywood share songwriting duties, with the latter noting: “If you listen closely, you can tell which songs are mine and which are Charlie’s. His songs are more poetic, while I’m always trying to slip a chorus in, but lyrically I’m more ambiguous and Charlie is straight to the point. The credits just list them as being written by the three of us: that equality is the philosophy we preach, and it was important to put that into practice in our own small way.”

Drily witty drummer Neale adds: “With two writers, you’re not defaulting to one vision. And it helps that we’re a trio, because if there are any arguments, it’s going to be two against one. So we’re always a democracy. The fact we’re so loud as a three-piece on stage? That’s partly down to the secret of reverb. But as a trio, you can’t have any unnecessary elements. If you take any one element out, it all collapses.”

Although there’s a timeless power to The Blinders’ songs, the trio are keenly aware of needing to express the malaise at the heart of Western society. “We try to write about the times we’re in, and we try to write daily,” says McGough. “We’re always going to want to get our songs out to the world as soon as possible, so that the events we’re inspired by aren’t out of date. Then again, the nature of social media and 24-hour news channels means the news cycle moves impossibly quickly.” That’s a frustration expressed in ‘Ballad Of Winston Smith’, where Haywood sings: ‘Forgotten stories on the news, a week or so and it’s adieu.’ “It’s one of the reasons we’ve moved slightly away from specific issues,” McGough nods. “We want justice in general, not just for specific topics.”

That sense of injustice is there in the title of ‘Columbia’, drawn from The Blinders’ fascination with cult leaders. Haywood explains: “The rise of populism here and in America means you can draw a line from Trump to Mussolini to Stalin, then through to cult leaders like Jim Jones and Charles Manson. Also, we’re a fan of one-word album titles, like ‘Humbug’ by Arctic Monkeys. One word can strike you, and you can draw so much from it.”

‘Columbia’ was recorded in a month at Gavin Monaghan’s studio Magic Garden in Wolverhampton, with Haywood enthusing: “Beautiful moments happen all the time with Gavin. He takes our ideas and makes them even more epic.” McGough continues: “We’re so hungry, we didn’t need anyone pushing us further than we push ourselves. Gavin was that calming influence on us that we needed.”

‘Columbia’ moves from the brutal brevity of ‘Free The Slave’ and ‘Et Tu’ to the seven-minute sprawling epic ‘Brutus’. “’Free The Slave’ and ‘Et Tu’ are short, sharp shocks,” says Haywood. “They say what they need to.” As for ‘Brutus’, Neale admits its initial inspiration is a mystery to the band too. “That song has changed so much, even we’ve no idea where it came from,” the drummer laughs. “Some of our older songs, we feel like we’re covering them when we play them. It’s the centrepiece of our shows, so it was important to get it right in the studio. It could have gone on for 25 minutes, let alone seven, but as with the other songs, it only says what it needs to say.” McGough admits ‘Brutus’ psychedelic atmosphere was initially tough to capture. “We’d just come off tour when we recorded it,” he recalls. “We went at ‘Brutus’ far too fast, and it sounded awful. The key to getting it right was slowing it down just enough.”

‘Columbia’ also features the powerful ‘Brave New World’, familiar from its use in a William Hill TV advert. “We thought about doing it for a long time and we were initially sceptical,” says Haywood. Adds Neale: “Ultimately, there are few quicker ways of getting your message out there than in a huge TV campaign. You can’t just preach to the converted and get your message out there to people who already support you. You need to reach out to people. That said, it’s a nightmare when the ad comes on when we’re back in Doncaster watching football with our mates. You have to go for a long piss during the ad breaks to avoid your mates ripping it out of you.”

It's that feeling of being mates, united against the world, that helps the essentially hopeful message of The Blinders and ‘Columbia’. There’s a powerful gang mentality in danger of vanishing in an increasingly gentrified music society, but an elixir which The Blinders possess in abundance. They talk of wanting to move quickly in music, babbling excitedly about new songs they’ve written already since Columbia was recorded. “We’re very certain we’ll be even more ambitious, lyrically and musically,” vows Haywood.

For now, the next chapter will have to wait. Dive into ‘Columbia’. A tangible utopia awaits.