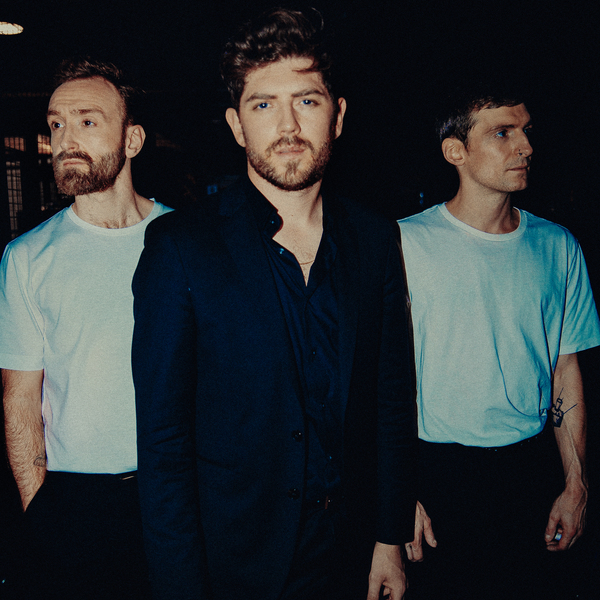 Rough Trade NOTTINGHAM are very excited to present this TWIN ATLANTIC album-launch show, with a live performance at the METRONOME venue in NOTTINGHAM (NG1 1AP) on Monday 27th January 2020.The evening celebrates the release of 'Power', the incredible new album released 24th January via Virgin.

- Tickets and Album + ticket Bundles can be collected from the Rough Trade Nottingham store from 10am on 24th January, until 6pm on Monday 27th January 2020, or from the Metronome venue from 8pm when doors open for the show.

- Doors open at Metronome at 8pm, and the on-stage time is approximately 9pm. But we highly recommend and advise that fans get down early for 8pm, for swift entry to the venue and to avoid any disappointment.

After ten years, Twin Atlantic got their Glasgow studio fully up-and-running. They gigged for thrills, and used the money to fund the album they wanted to make. They took charge of production. And only then, when all that was done and dusted, did they sign a new record deal.

“We have had a bit of a car crash moment,” reflects Sam McTrusty, singer/guitarist with the Glasgow rock band. “But it’s been all to the good. It focused our thoughts on what we wanted this next bit of our band’s life to be like – and sound like. And we had one guiding thought about the new album: how on the edge of thrilling can we make this?”

At Jacknife Lee’s (U2, The Killers) urging, after working together on the their last album, the band built their own studio in the unfussy space they’d had for the best part of a decade in a factory-turned-business centre in a slightly (shall we say) unloved corner of Glasgow. The Irishman assured the Scotsmen they had the knowledge and the skills. “And the ear for it,” notes McTrusty. “He said: just put all your gear in the one room and make music like we make it in my studio.”

“And we decided we weren’t going to have a single musical idea outside this room,” says McNae.

“And that was so… fucking… difficult!” laughs McTrusty. One aspect of that difficulty was the decision to change their relationship status with guitarist Barry McKenna. While their good friend remains an integral part of their live set-up, he’s no longer involved in the studio. Simply, the new, post-Jacknife Lee era of Twin Atlantic creativity didn’t sit so readily with him. Now he pours his own writing skills into music for film and TV, a creative outlet that speaks to his interests.

The music poured out of them. The first song that emerged as a keeper was the hard rock New Romantic rush of I Feel It Too. You could call it an amped-up take on Duran Duran’s Planet Earth; Twin Atlantic wouldn’t object. It’s also their “we’re not fucking about” song.

I Feel It Too felt like a blueprint for where they wanted to go: a place that was “dark and euphoric at the same time”. They wanted to dig back into the music they loved in their teens: less straight up guitar rock, more Depeche Mode, 2 Many DJs, the tunes spun at seminal Glasgow techno club Optimo.

Then came Barcelona. Big chorus. Big balls. Lyrically, it’s McTrusty reflecting on the turbulent times in the band. But that feeling was juxtaposed with the most settled he’s ever been in his private life. He’s been home in Glasgow for the longest period since Twin Atlantic started touring when he was 18, a situation reflected in his falling in love, getting married and recently becoming a dad. More change.

Barcelona, then, is a hymn to her, and to the band. Also falling into the love-song-to-his-wife category is first single Novocaine – albeit a love song with a racing, adrenalised synth-rock throb and pound.

“It’s the most focused, autobiographical song on the album. And we're trying to tap into our LCD Soundsystem fandom,” McTrusty grins. “That’s something has basically never gone away. They’ve a band that use guitars and electronics in a way that’s quite wholesome and never feels contrived.”

Elsewhere, on Messiah and Ultraviolet, Twin Atlantic cheerfully acknowledge the influence of Depeche Mode (stadium goth era). There is, too, the thunderous rave of Praise Me and a glorious chorus and kaleidoscopic vocal soundscapes on the sinuous Oh Euphoria.

Finally there’s Volcano, the first song from POWER be played live. Unveiled in August during blistering performances in Reading, Leeds and Glasgow, it has a tall-walking punk-funk swagger that hits you straight in the hips.

“We were shitting ourselves,” admits Kneale. “But it went down a storm.”

This, then, is POWER. Eight punchy tracks and two compelling interludes. No fat, no fuss, all fire, made by a band plugging in, turning it up and taking charge – it was only once the album was completed that Twin Atlantic went back to record labels. The message: here are our new songs, take them – and the band – as you find us. Virgin EMI were only too happy to enthusiastically oblige.

“There’s not a single other thing we could have done to be back in control of our own futures,” states Ross McNae of exactly the outcome they dreamt of two long years ago.

“This album: it’s just really free, and we’re really free,” affirms Craig Kneale. “There was no premeditation. It’s just a fully creative entity, with no limitations. And we stayed true to that idea right till the very end.”