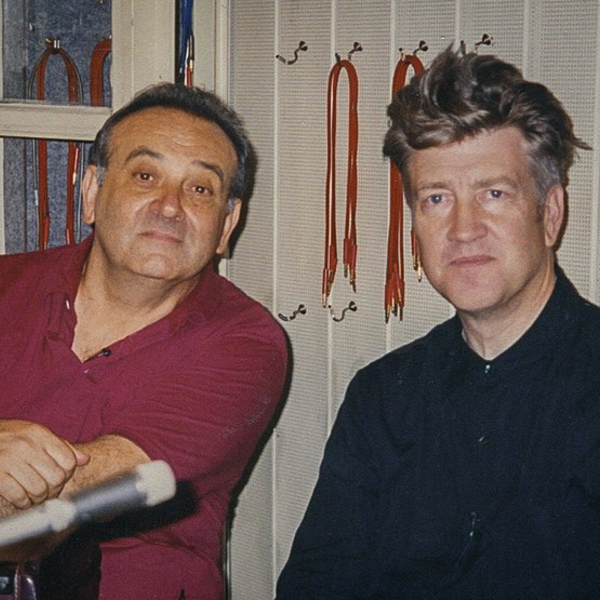 Join us on Wednesday, November 7th at 6pm for an signing with experimental jazz artist Angelo Badalamenti to celebrate the release of Thought Gang.

Unreleased for decades, the time-capsule album will finally be available November 2 via Sacred Bones Records.

By the time Twin Peaks’ second season had aired and Fire Walk With Me had just began principle production, Thought Gang had been born. The esoteric jazz side-project of David Lynch and Angelo Badalamenti evolved from the seeds of Twin Peaks’ trademark slow cool jazz and blossomed into more experimental pastures: horizonless vistas of acid-soaked free-jazz, laced with spoken word narratives and sprawling noisescapes. Fire Walk With Me’s soundtrack would ultimately showcase two preliminary tracks (‘A Real Indication’ and ‘The Black Dog Runs at Night’) from a full-length album that wouldn’t see release for the next two and a half decades. Between May of 1992, and continuing throughout 1993, the bulk of the remaining material for the album was recorded in pieces…dove-tailed into a string of contracted sessions for other Lynch-Badalamenti projects. The defining elements that would birth Thought Gang into a fully-formed concept and eventually an entire album, however, happened during the 1991 session for ’A Real Indication.’

As the oft-told story goes, Lynch and Badalamenti had just finished recording the initial instrumental take for ‘A Real Indication.’ A set of lyrics had been penned, leaving Lynch with the question: who would he get to sing them? Eager to prove and deliver, Badalamenti suggested that he himself give it an attempt, much to Lynch’s uncertainty that he’d actually be the right fit. “I’d heard Angelo sing before…he used to sing on demos and things…I knew what Angelo sounded like and I thought he was going to embarrass himself…I thought there’s no way this was gonna work.” Much to Lynch’s surprise, Badalamenti launched into the song with his distinctive talk-sing delivery, summoning such a violent laughter-fueled excitement from Lynch that he literally induced a hernia. “It was like a lightbulb exploded in my gut,” Lynch recalls. “Angelo was feeling it. He was feeling it…we hit the button and he just took off!” A giant lightbulb simultaneously went off in Lynch’s head, and it was perhaps the precise moment Thought Gang splintered off into an entity separate from all prior collaborations the two had had up until then. Weeks later, Lynch was thrust into principle photography of Fire Walk With Me, carrying through the production the very same herniated stomach.

Recordings for Thought Gang continued throughout 1992 and 1993, spontaneously happening during a run of sessions for an assortment of other projects. During a September 1992 recording date for Lynch’s HBO miniseries Hotel Room, ’Logic & Common Sense’ was recorded. “We would book a session for something, and then go off and do other things [toward the end],” Lynch recalls. “Once the players were in the room, we’d make hay while the sun shined.” Each player involved was a unique wealth of talent that enabled the improvisational approach to the recordings to flourish. Improvisation had always been an important tool in Lynch’s repertoire, and an early title for ‘Logic & Common Sense’ (originally entitled ’Headless Chicken’) reveals the original directive the musicians were given in order to elicit the performance. Bassist Reggie Hamilton remembers distinctly how Lynch set the tone of the improvisation, recalling the brief but descriptive sentence: “Imagine you’re a chicken with your head cut off running around with a thousand bennies shoved down your throat!” What followed was a frenetic, anphetomine-esque musical conversation between seasoned players for exactly 3 minutes 32 seconds before the end of the 2” tape whipped across the Studer’s play head, flopping against the take-up reel and cutting the recording short. Every inch captured from that performance can be heard on the final record, down to the roll out.

Similarly, the sprawling ‘Summer Night Noise’ began with a verbal brief outlining the piece’s desired structure: “I would just tell [the guys], it starts out really, really quiet…think summer night: insects, a breeze, grass blowing in the wind…and in the distance a storm is coming…and the storm is getting closer…and closer…and the storm breaks loose and it’s just a violent summer storm with thunder and lightning…and it goes and goes and goes and then calms down and drifts away…and then we’re back to a moist, humid quiet.” “I would tell them a bunch of stuff and then they would play that. It was them catching the thing and painting a picture with their instruments and talent.”

In the years following, fragments and working versions of Thought Gang material would make appearances in everything from a Lynch-helmed Adidas commercial to scenes in Hotel Room, Mulholland Drive, INLAND EMPIRE, deleted scenes from Fire Walk With Me and most expansively utilized in Showtime’s third season of Twin Peaks. Both ‘Frank 2000,’ ‘Summer Night Noise’ as well as an alternate instrumental mix of ‘Logic and Common Sense’ would score scenes from season three and aid in defining the show’s distinctly experimental, noise-tilted soundtrack. “It’s sort of like jet-fueled jazz in a weird way…but it’s all based on stories,” says Lynch. “It’s Modern Music.” Those two words seem to efficiently capture both Thought Gang’s essence and distinctively genre-less genre. Quite often music that finds release beyond its decade of creation experiences a bit of an aural patina resulting from the process of marinating in the ether of time. Perplexingly, Thought Gang retains a contemporary quality difficult to quantify. “I actually had the name Thought Gang a long time before we even recorded anything for it” Lynch casually remarks…and, fittingly, the resulting album somehow still sounds ‘modern’ and will continue to remain ‘modern,’ decades upon decades after is creation.