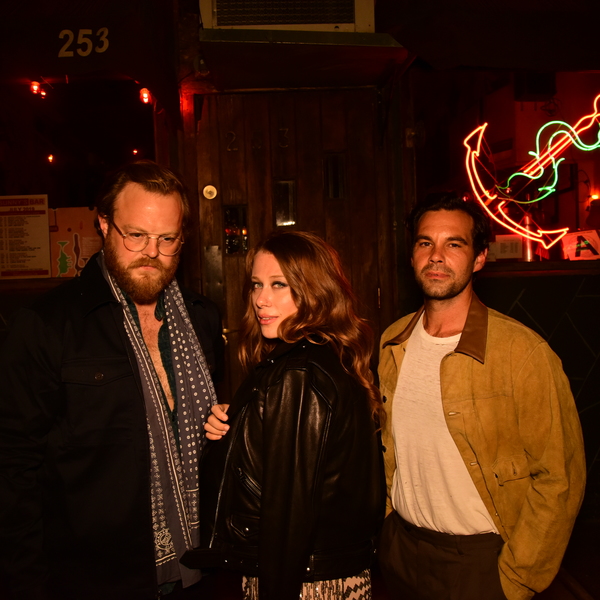 Join The Lone Bellow to celebrate their new release Half Moon Light (out 2/7 via Dualtone) with an acoustic performance and signing.

FREE performance, purchase Half Moon Light on CD or LP from this page or in store for signing only

“I want it to bring comfort,” The Lone Bellow guitarist Brian Elmquist says. “But it’s not all hard conversations. There’s a lot of light and some dancing that needs to happen.” Brian is reflecting on Half Moon Light, the band’s highly anticipated new album.

Half Moon Light is an artistic triumph worked toward for years, earned not by individual posturing, but by collective determination and natural growth. With earthy three-part harmonies and songwriting as provocative as it is honest, the trio made up of Brian, lead vocalist Zach Williams, and multi-instrumentalist Kanene Donehey Pipkin creates sparks that make a stranger’s life matter or bring our sense of childlike wonder roaring back. On Half Moon Light, The Lone Bellow mix light and dark to muster a complex ode to memory, a call for hope, and an exercise in empathy. Anchored in the acoustic storytelling that first so endeared the band to fans and critics, Half Moon Light also takes more chances, experimenting with textures and instrumental fillips to create a full-bodied music experience. The result is The Lone Bellow’s most sophisticated work to date.

“We try to invite as many people into the process to see what we can make together,” Brian says. “I like that spirit and that freedom. Then, the songs speak for themselves.”

That wholehearted embrace of collaboration defines Half Moon Light. The record marks a return to recording in New York with Aaron Dessner, whom the band counts as both a hero and a friend. “We already had a friendship with Aaron and a strong, shared understanding of our musical vision,” Zach says. “It’s really important to us to be a part of a community of musicians. We like that way of making something. Aaron showed us a new way of trusting. His idea of bringing in Josh Kaufman and J.T. Bates was such a beautiful gift. The meekness that these friends brought to the table was something that we will never forget. A sense of controlled fury. Lightning in a shoebox.”

“Aaron has a powerful quietness about him,” Kanene says. “A lot of people I meet in the music industry have lots of bravado, and it’s something I have trouble believing. Aaron doesn’t have that. He is a joy to work with. A true friend.”

For the first time, the band stayed where they recorded, sequestered from the world at Aaron’s studio in upstate New York. They fell asleep at night to the sound of coyotes howling and felt the freedom to fall into rabbit holes that would have otherwise been left unexplored. “We made this record in a place of joy with our friends. We were trying to do something bigger than ourselves,” says Brian. “I think we’ve been wanting to make this record for a while now. It just hasn’t come together as perfectly as it did this time.”

A lone piano launches into a hymn as the album’s intro track. The pianist is Zach’s grandmother, playing at the funeral of her husband of 64 years––Zach’s grandfather. The hymn returns as an interlude and outro, underscoring The Lone Bellow’s intention for 12 songs to be experienced together, as an album.

Wonder––feeling it, losing it, finding it again––underpins the entire record. Pulsing with the trio’s signature harmonies, the track “Wonder” is a loving call to reclaim the childlike awe and appreciation age takes away. Zach pulled from vivid childhood memories to craft the song, which transports listeners to moments of breathlessness experienced in the everyday: cheap coffee, backroad car rides, pine-tree views, and powerful songs.

Jubilant “I Can Feel You Dancing” rolls into a cathartic celebration. The song pays tribute to “lionhearted” free spirits with horns and soaring vocals. With a winking jungle beat, “Good Times” tells tales Zach has collected over the years. “Some stories were told on a boat I worked on in the Caribbean in the middle of the night. Some were in old Irish pubs in Manhattan. Some were in backyards down in my hometown. Some were in a hospital bed,” Zach says. “I wanted to shine light on the fact that there are still people living with beauty and reckless abandonment.” Delivered over intimate acoustic guitar and hushed backing instrumentation, “Enemies” is a self-contained call and response that reconnects life-defining moments with the frustrating or tenuous present that threatens to snuff out the magic.

Lead single “Count On Me” reminds us to lean on one another with soul-shouting intensity. “After singing ‘Count On Me’ in the studio, we walked outside and couldn’t help but think about the sense of camaraderie and kindness that seems to happen at our shows––like strangers becoming neighbors, wrapping their arms round each other’s necks, and saying, ‘I got ya,’” Zach says. Praise for deep friendships pops up again and again throughout the album: “Friends” celebrates the relationships forged after years together in the trenches––with a musical swagger that nods to David Byrne and Tom Petty.

Kanene takes the lead on tour-de-force “Just Enough to Get By.” Her inimitable voice––capable of grit and smoothness––pushes through line after line with steely purpose. The performance would saunter were it not for the rage bubbling underneath. Kanene wrote the song about her mother, who was raped at 19, then sent away to have the baby that resulted. When she returned home, she never spoke of what had happened until 40 years later, when Kanene’s half-sister––the baby––found them. “I’ve met my half-sister many times. She’s wonderful and lovely and an amazing story of something never being too broken to be fixed. But my mom had to work through the trauma,” Kanene says. “This song was me putting myself in my mom’s place, releasing a lot of complex emotions. Anger is definitely one of them. Hurt, frustration, sadness. We all have experiences that could be better if we could talk about them, but we keep them hidden.”

Album standout “Illegal Immigrant” also features Kanene’s vocals. Brian took the lead writing the song, which tells the true story of a mother and child separated at the U.S.-Mexico border. The chorus’s “I promised I’d find you, wherever you are, wherever you are / Here I am” is equal parts haunting, heartbreaking, and reassuring––and the unfiltered words actually spoken by the immigrant mother into a press conference microphone. Kanene sings with weighty restraint––like a parent burying their own terror so they can be their child’s rock. “I was trying to tell her story the best I could,” Brian says. “I wanted to keep myself as far out of the equation as I could and just try to connect––to help find some compassion.”

Brian also penned “Wash It Clean,” which both Zach and Kanene point to as a favorite. Lilting with guitar and harmonica, the song is a letter to Brian’s dad, who passed away suddenly last year. The two had a strained relationship, and Brian spent years trying to find some common ground. They did, and then two months later, his dad was gone. The band recorded the song on the one-year anniversary of Brian’s father’s death, without Brian even realizing it at the time. “I feel like that means he was here––or in me,” Brian says. “Working really hard to find understanding was probably one of the greatest gifts and lessons of my whole life.”

The stories behind the songs matter––but they aren’t what matters most. In the end, The Lone Bellow’s music needs no explanation. Just listening offers a salve and a shelter. “In my own perfect little world, I would be able to put the music out and not talk about it––just, Here. Bye. See you next time,” Zach says, then laughs softly. “I do hope someone will find this music in a peaceful moment, when they can turn it on and get lost in the story and the sound.”